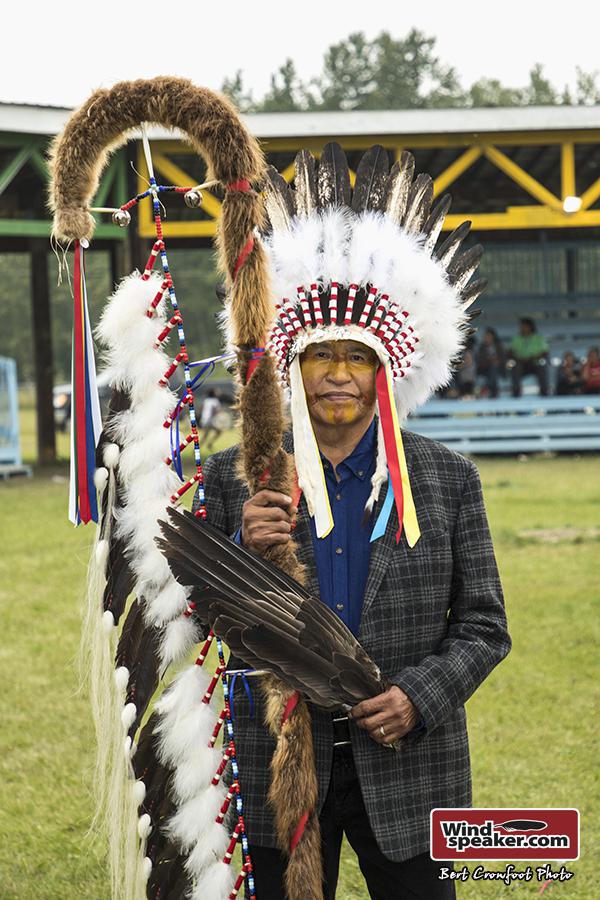 “Today, too many don’t earn their feather hats properly…. You know, people just play with them, and give them. And they want to show honor to people, but maybe they should learn something about what a transfer is.”

Travis Meguinis, a respected member of the Tsuut’ina Nation in Alberta, is talking about the importance of a headdress.

Headdresses aren’t just given out freely, he said. They are intended to represent that there is something special within the person who is receiving it.

“With transfer rights, it’s very important we have these ceremonies, because it speaks about who we are and our identity as human beings. It’s like a right of passage,” he said.

Meguinis was shocked when Chief Rain first told him earlier this year he didn’t have a headdress. Believing it is something that every good chief should have gifted to them, Meguinis agreed to give Chief Rain the transfer rights when the chief decided on a date and time. And the fact that everything went smoothly was more proof the Chief was a worthy candidate, said Meguinis.

“There’s this one picture of Arthur… He has a really big kid smile that time. That just showed me how he was feeling. You know, we grow up and have our dreams, as men,” said Meguinis. “Some of us want to play in the NHL and some of us recognize the honor that is in being a chief. That picture just made me think ‘I wonder if Arthur wanted to be chief when he was a little boy,’” he added.

According to Meguinis, a strict protocol must be followed during any headdress transfer ceremony. Meguinis follows a tradition that comes from Chief Sitting Bull.

Sitting Bull is one of the most well-known chiefs, born in 1831 in what is now South Dakota. Sioux tribes united under his guidance, fought an infamous battle known as the Battle of Little Bighorn against General Armstrong Custer in eastern Montana in 1876.

Sitting Bull actually came to southern Alberta after this battle, and gifted First Nations of the Blood Tribe with the headdress transfer ceremony Meguinis uses.

Meguinis is from Tsuut’ina, but the transfer rights were gifted to him by Elder Bruce Wolfchild when Meguinis was only in his twenties.

“When he (Sitting Bull) came north, our people hosted him and they helped him replenish his horses, and his tipis. And he stayed for a little while. The stories that they had about him were that he was such a great man that he had his own travois of headdresses,” said Meguinis.

A travois is a horse-drawn piece of carrying equipment dating back to the 1700’s.

“When it was time to head back, he made mention he would leave the feather hat, which was the greatest award,” he added.

For Meguinis, a special part of the ceremony is to have songs sung to “call on the chiefs”—chiefs like Chief Sitting Bull—to be present in spirit during the ceremony.

The ceremony does not belong to Chief Sitting Bull, however; Instead it was given to Sitting Bull by someone, as well, with the original source ultimately being the Creator.

Meguinis had an Elder from Paul Nation, an Elder from Thunderchild, Chief Tony Alexis, Chief Rod Alexis, and a war veteran present for the ceremony.

It is a belief that a war veteran should be included in every transfer ceremony, he said. And Chief Tony Alexis already has transfer rights, so he performed the “capture” of Chief Rain.

After Chief Rain was captured, he was made to sit down with Meguinis on a buffalo robe. Buffalo is used because of their strong leadership ability. Then Meguinis carried out the rest of the ceremony, painting the Chief's face and motioning over him according to protocol. Afterward, four guests shared “good luck” stories to bless Chief Rain during his leadership from then on.

“After the stories of good luck, we stand up and have a victory song and dance in the four directions. And then Arthur shares his stories at the end… But Chief Tony Alexis wanted to sing an Honor Song, so he added his own little touch. And Chief Rod Alexis handed the eagle staff (made by Chief Rain's late step-son Quinton Kootenay) over to Arthur,” he said.

Meguinis deeply enjoys being able to hand these ceremonies onto others, he says, and each time he feels grateful to experience the joy coming from the recipients, such as the joy that Chief Rain displayed.

But Meguinis remains concerned about people who come across their headdresses too easily, or don’t come across them honorably at all. Even the person who puts it together should have the rights to work with feathers, he said.

“We have these people that can all of a sudden get their hands on a headdress or get their hands on a war bonnet… and say ‘Oh, I’m a chief,’ and just use it to compete,” he said, referring to powwows which have special categories for leaders with buckskin outfits and feather hats.

“But there’s really no honor to that… There’s no respect or honor given to that headdress,” he said. 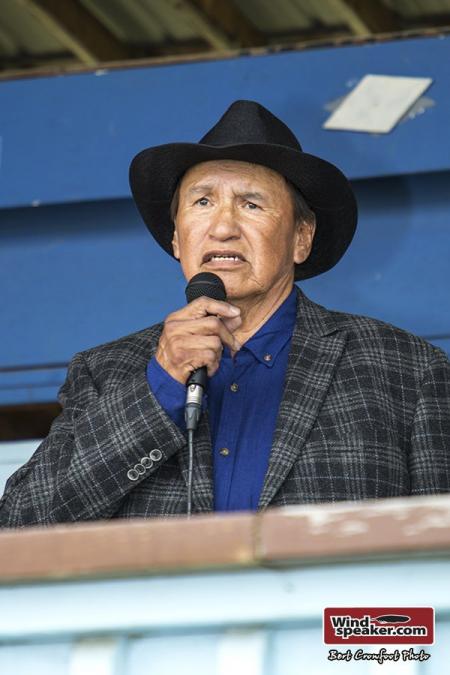 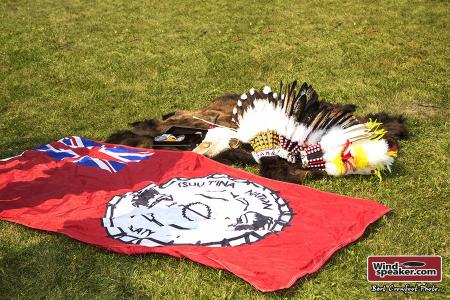 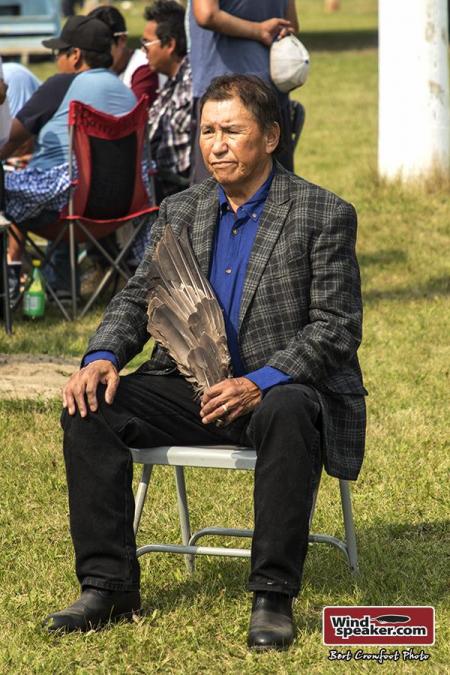 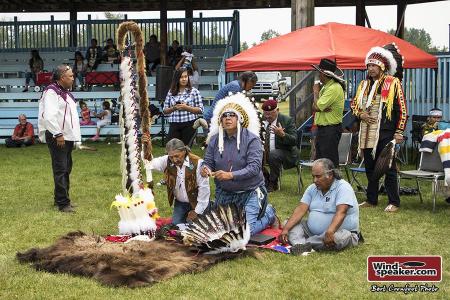 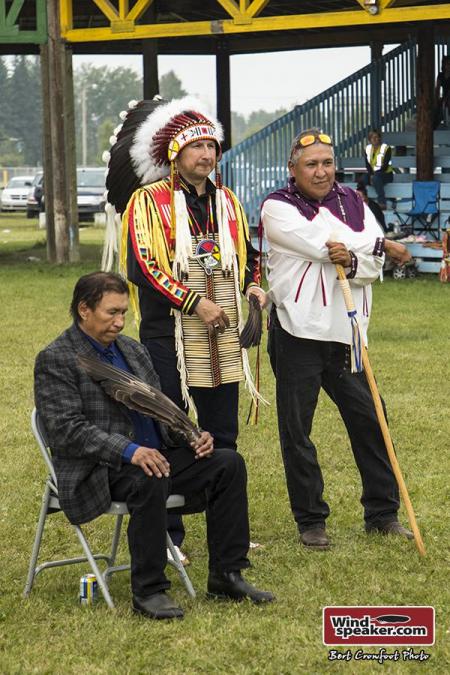 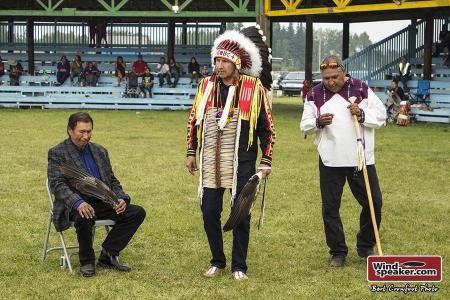 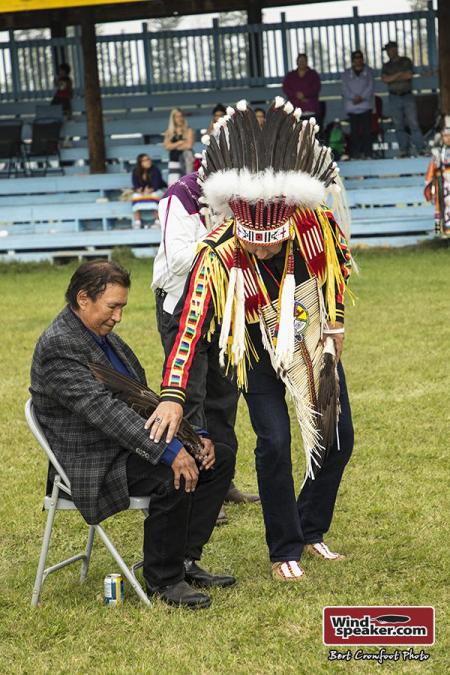 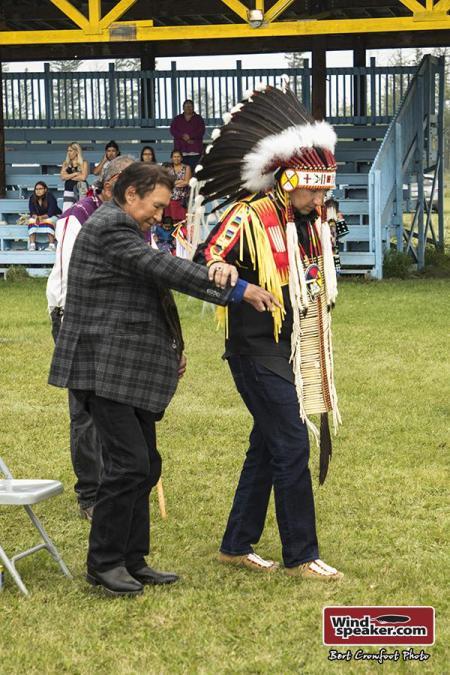 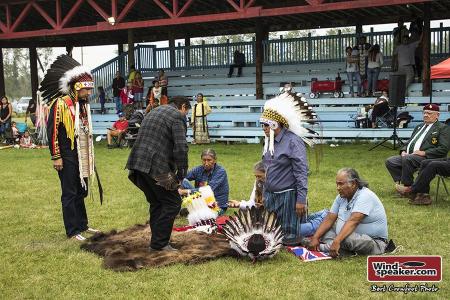 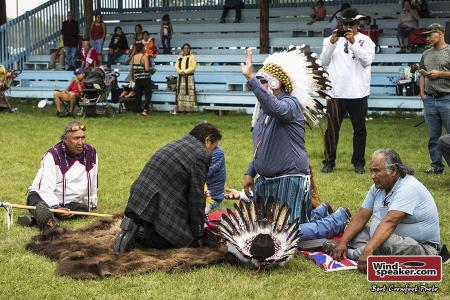 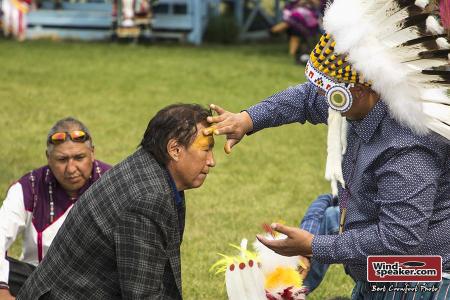 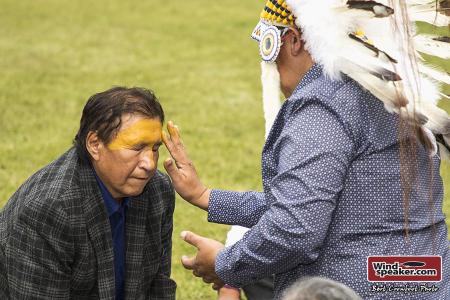 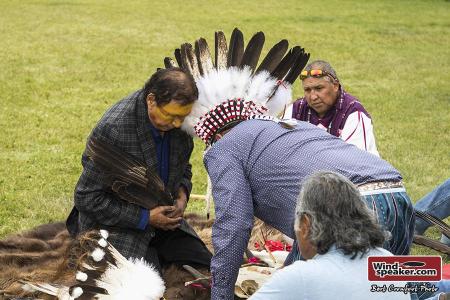 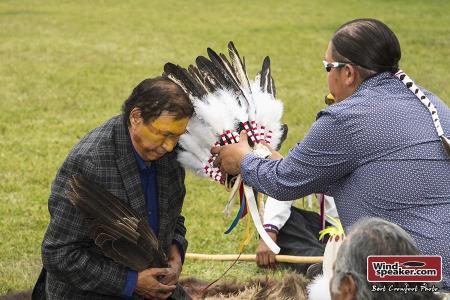 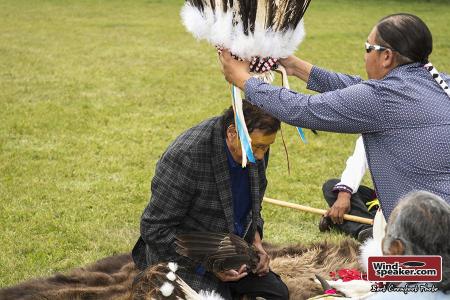 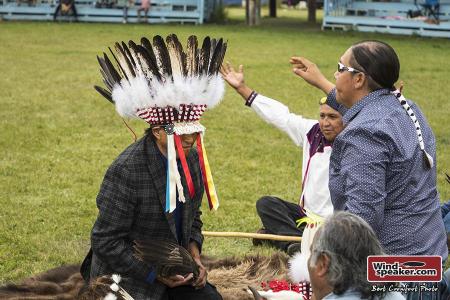 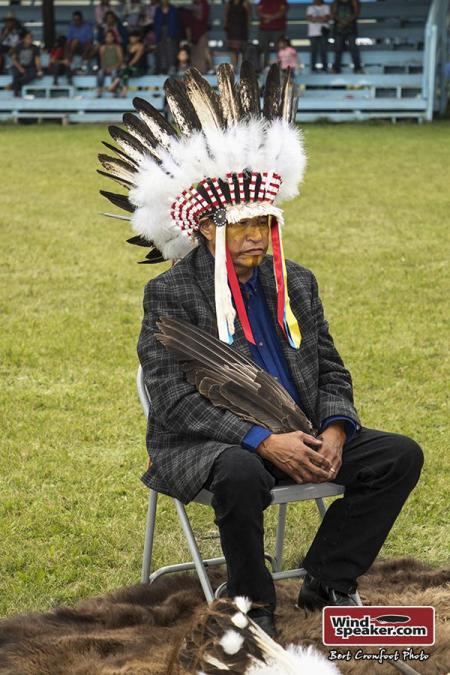 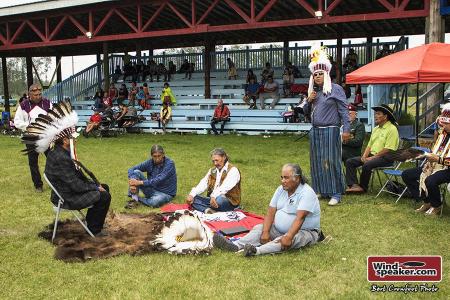 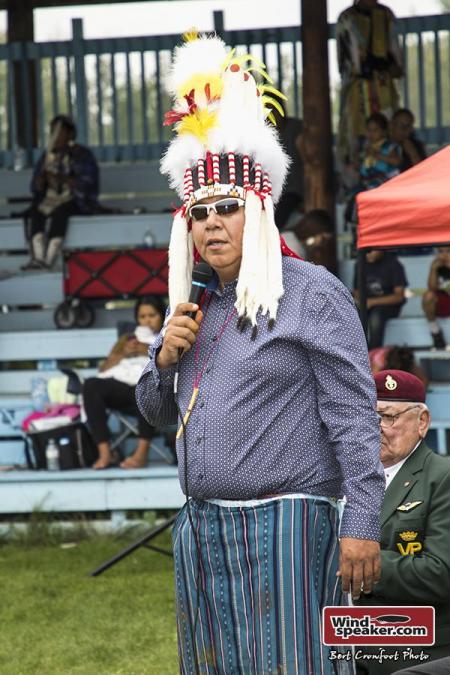 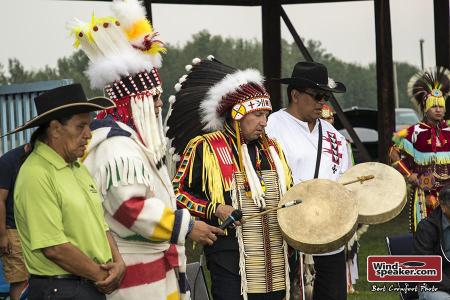 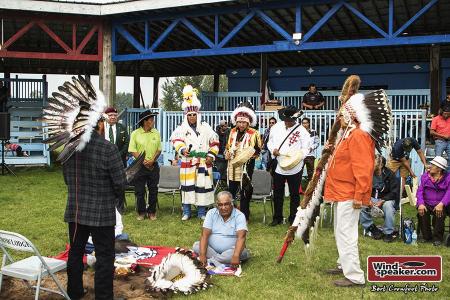 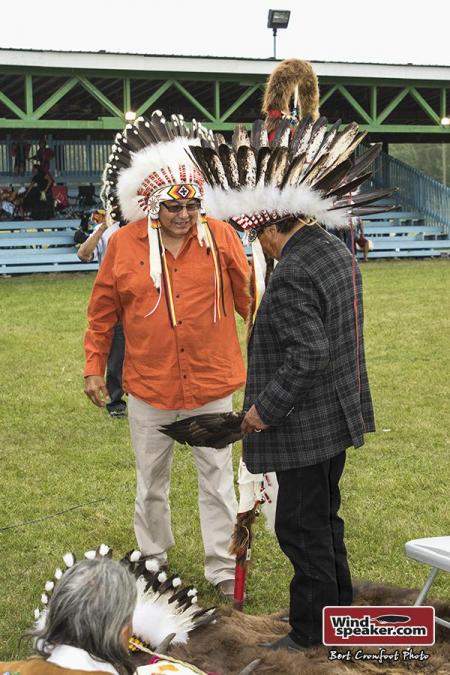 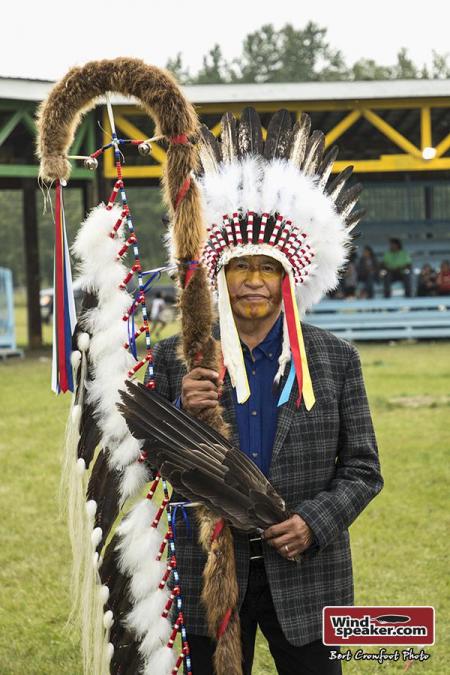 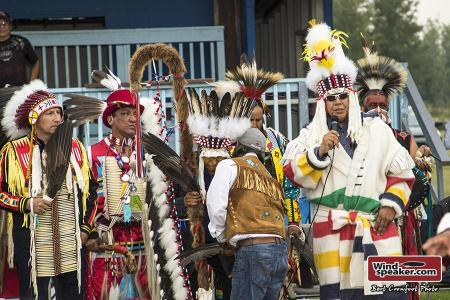