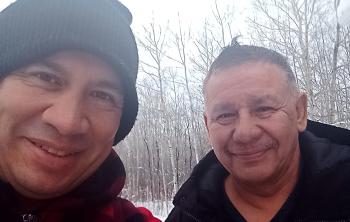 “If it appears that the scope of the class action needs to be expanded, it will be expanded.” — Rob Louie, president, Band Members Advocacy Alliance Association of Canada
By Shari Narine
Local Journalism Initiative Reporter
Windspeaker.com

“I must have been six or seven,” she recalled of her first encounter with a “very mean and very rude” wife and husband dentist team at her school on Ministikwan Lake Cree Nation in Saskatchewan.

“One by one they’d come and get us, and that lady, the wife, would hold our hand, not knowing where we’re going, take us to the library, say, ‘Sit down.’ So we sat down. Not knowing our teeth were going to be looked at. Right then and there, they’re looking at our teeth. And all I see are big needles and then a lot of cleaning and then, all of a sudden, I feel needles in my mouth. ‘You feel this?’ (the dentist asked). Of course, I felt it and they still drilled without waiting.”

Crooked Neck, who is now 55, says her teeth have hurt and been sensitive as long as she can remember, and she can’t see a dentist without fear.

“I get these flashbacks where I’m sitting in this chair. I’m clenched to the chair. I’m actually pinching myself not to feel the pain that I felt. When I close my eyes, I’m like a kid sitting in that chair. It’s so traumatizing,” she said.

Crooked Neck is joined by Karen McCullum from Peter Ballantyne Cree Nation as representative plaintiffs in a potential class action to address the alleged inferior and harmful dental work provided to First Nations residents in Saskatchewan between the years of 1960 and 1980 under the authority of the federal government.

The Band Members Advocacy Alliance Association of Canada (BMAAAC) has taken first steps toward a potential class action and is asking impacted Saskatchewan First Nations residents to register with them. A “prominent” but unnamed Calgary law firm is providing assistance, says BMAAAC in its announcement, made in late December.

Crooked Neck says the majority of members in her community suffered through poor dental work. If their teeth weren’t pulled, then cavities were filled with “metal.” Crooked Neck has a hard time understanding how children, who lived off wild meat and rarely ate candy, could have had cavities.

“All our fillings were metal. When I went back, like a couple years back, the dentist told me to replace all these fillings because these are not good because they could cause illnesses. They’re like toxic. At that time, my fillings came all out and I replaced them,” she said.

The mercury in the metal or amalgam fillings is the concern.

Crooked Neck has tried to convince her sister to get her fillings replaced as well, but she won’t go to a dentist.

“I asked my sister does she still have her old fillings? ‘Of course, I do,’ she said. ‘Oh my God, get them changed because they could be toxic. That’s what the dentist told me.’ My sister said, ‘What traumatizes me is what I went through. They pulled out my teeth and I looked at the bucket full of teeth there.’”

Crooked Neck says in discussions she’s had with surrounding communities, she’s come to understand that Ministikwan Lake Cree Nation is not unique.

Makwa Sahgaiehcan First Nation Chief Ronald Mitsuing says there was no dentist near his community so instead their dental concerns were dealt with by a doctor at Loon Lake hospital in the 1960s and ‘70s.

“He wouldn’t fix our teeth. He would just pull them out. So we have a lot of people around here with missing teeth like me,” said Mitsuing.

Now members have access to a dentist in Meadow Lake, he says, about 60 km away, and a band member does dentistry for the reserve’s youth.

As for why so little concern was shown by the federal government all those years ago when it came to dental care, Mitsuing said, “That I do not understand…I don’t understand why we don’t get the same kind of care as anybody else.”

Mitsuing is in full support of a class action.

“I’ve actually been talking about this for quite a few years,” said Crooked Neck, who raised the issue with Rob Louie, president of BMAAAC. “I was talking one evening with my sister and said, ‘You know? Something needs to be done. They need to be accountable, as well as compensate the people for what we’ve been through with our teeth.’”

“If it appears that the scope of the class action needs to be expanded, it will be expanded,” he said.

While a compensation figure has yet to be determined, Louie says the threshold for a class action to move forward is a minimum $5 million.

“We anticipate resistance from the federal government throughout the class action proceeding, whether it’s accessing federal records that will confirm the accounts of Saskatchewan First Nation members or just the names of all those involved in the alleged negligence and harms done to the members of this class action,” he said.

Louie points out that many of those impacted and traumatized by poor dental care are now Elders.