Decade of Indigenous Languages kicks off in Paris 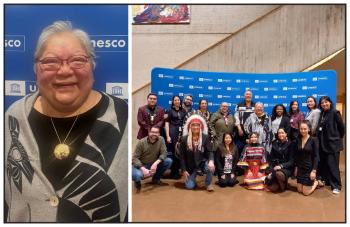 “I know that (children) live in a time where the colonizer’s language is so dominant in everything we do. It's a real challenge for our young people to not just learn, but to use our languages.” — Dr. Lorna Wánosts’a7 Williams
By Odette Auger
Local Journalism Initiative Reporter
Windspeaker.com

Dr. Lorna Wánosts’a7 Williams (Lil̓wat7úl) is at UNESCO headquarters in Paris, celebrating the formal launch of the UN International Decade of Indigenous Languages 2022-2032. A global task force is mobilizing coordinated and immediate action to implement the Decade's Global Action Plan.

“As Indigenous people, we've been isolated and invisible for so long. So it's really good to meet people who are facing similar challenges, and hearing the stories of how people have defied everything that has been thrown at them in the destruction of our languages,” said Williams.

She chuckles to think how surprised her little girl self would be at the global Indigenous language revitalization efforts.

“When I was a little girl, I only spoke my language, and then I lost my language when I went to residential school.” Williams grew up in Mount Currie, B.C.

Williams is attending the UNESCO gathering to witness the historical occasion, while sharing her wisdom on revitalizing Indigenous languages and advocating for what's needed to accelerate their resurgence.

She has been participating in key meetings to plan the outcomes of the decade as a member of the Canadian Commission for UNESCO’s working group, and as an observer on the Global Task Force for the Decade

One of the highlights for Williams at this official launch was to stand with Chief Willie Littlechild. “He was one of the key individuals that really made this happen. And so it was wonderful to stand with him yesterday on the stage and to hear him. It’s just so celebratory.”

Her life’s work has been centred on strengthening and promoting, not just her own language, but the 34 Indigenous languages and more than 90 dialects in B.C. as chair of First People’s Cultural Foundation.

Along with celebrating the official launch of the action plan, she’s enjoying the First People’s Cultural Council is being celebrated, too.

“FPCC was recognized during panel discussions as a leader in so many areas of language revitalization.”

First Voices was described this way by one of the panels: “As one of the leading actions in the digital area, it is unique.” First Voices is a community-led platform where Elders and language teams can upload dictionaries, songs, stories in audio and video.

Another panel highlighted the First People’s Map, “as the first of its kind where Indigenous people had an opportunity to place themselves on a map. Because we've always been put on maps by other people. By linguists, anthropologists, archeologists, government, churches,” Williams said.

“In that map, people were able to really share their stories, their names, and place names, and nobody else has done that.” The map was 10 years in the making, as a coordinated effort. With the people themselves working on it from each of the language communities.

Other panels recognized other areas in which FPCC is leading the way, highlighting the Mentor-Apprenticeship program, and the Indigenous language keyboards so people can share information “in their own languages, in their own writing systems.”

When Williams thinks of the children of today, “I know that they live in a time where the colonizer’s language is so dominant in everything we do. It's a real challenge for our young people to not just learn, but to use our languages.”

She feels hopeful knowing future generations will have tools and resources to use to revitalize Indigenous languages, and hopes they’ll be speaking in a world that holds appreciation and respect for their languages.