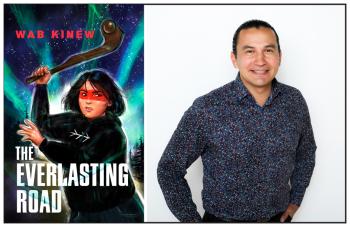 Author Wab Kinew with the book cover from his newest release The Everlasting Road for young adults. Photo of Wab Kinew by Rachael King

“…spending some summers in Onigaming, the books we had in the house on the rez were one of my windows into the outside world. So I think it’s very powerful what a book can do…” Wab Kinew
By Shari Narine
Local Journalism Initiative Reporter
Windspeaker.com

When the coronavirus pandemic forced school-learning to happen remotely in the beginning of 2020, it occurred to Wab Kinew that most teenage communication had already been happening virtually.

It was with that in mind that Kinew launched his two-volume series that saw his young characters not only interact in the real world, but through gaming as well.

The second book in that series, The Everlasting Road, has just been released. It follows two years after the first in the series, Kinew’s Aurora Award winning Walking in Two Worlds.

“Most kids are gamers and just to put things in their perspective, video games are a pretty important part of the landscape and I thought it was a good way to connect,” said Kinew, who himself is no stranger to gaming.

Kinew admits that when he was younger, whether it was with his friends from school, from Winnipeg, from the Onigaming First Nation in northwestern Ontario, or hockey, it was all about playing Nintendo or Sega or other video games.

Video games, like music and movies and tv shows, were all part of his pop culture landscape.

That’s the same now, he says, but he wants his books to add another dimension to the pop culture that youth share today. Namely, that one of their influences can come from Indigenous perspectives.

The protagonist of both books is Bugz, a young Anishnaabe girl, who lives on the Rez. In the virtual world, or the Floraverse as it’s called, she’s “the myth, the legend, the ruler.”

Gaming does allow for that escapism, says Kinew, where somebody can be more than they are in their everyday life.

“It can be an element of escaping your day-to-day, but it’s also a situation where I wanted it to reflect in the books (that) for many young people what happens in the online world is at least as important as what happens in the real world,” he said.

Bugz’s real world is grief-filled. Having lost her older brother to cancer, she struggles with how to deal with that loss. That struggle blends the boundaries between her real world and the virtual world.

Bugz’s best friend Feng, who also lives on the Rez, has his own struggles. Along with being worried about Bugz and her unhealthy attachment to her new creation in the Floraverse, he’s dealing with a sudden discovery about his parents. Feng is an Uyghur from China.

This novel, like its predecessor, touches on some heavy subjects. Along with discussing the plight of the Uyghurs, other issues include residential schools, cyberbullying, environmental concerns and artificial intelligence.

Kinew firmly believes that young people are “very smart and well versed” in political or human rights and social or cultural issues.

“I just thought it would be a way to boil down things into book form (and) a young person would think, ‘Yeah, I’m exposed to all sorts of different ideas in the online world, in the real world, in the media, in social media. If I can be thoughtful and be true to who I am then I can still chart my course forward in this life and figure out how to think and respond and react to these different topics I’m being exposed to,’” said Kinew.

“I just wanted to show a couple of fictional young people who are being exposed to all sorts of different ideas like this and are still finding a way forward where they can be good people and true to who they are as individuals.”

Grief is also an issue Kinew wanted to deal with.

As leader of the Manitoba NDP, Kinew has spoken to teachers, counsellors and other professionals who deal with youth.

“I’ve heard time and time again that often we don’t help young people grieve. And here, when I say grief, it can be losing somebody who is close to you or it might also be grieving a stage in your life that has passed by because you’re growing up. Or grieving your community when you move somewhere else to pursue school or sports or a career,” he said.

In The Everlasting Road, Kinew draws on the ancestors and the “very sophisticated and strong and compassionate” way the Anishnaabe culture has to support people in their grief.

“I wanted to introduce some of those cultural traditions. Again I kind of present them in a fictionalized way in the book because I want to respect the culture…but I’m trying to introduce to the young people, ‘Listen if this is something that becomes a challenge for you, there are things within our cultural background that can help you and support you,’” said Kinew. “In fact, I think that’s what the ancestors were doing in handing down these traditions to us. They were giving us tools that might help us in our own journeys through life, whether they’re positive experiences or some of those more challenging experiences.”

The title of the novel, The Everlasting Road, refers to “the path you walk on through life,” says Bugz. “And that’s the path that souls take after they leave this world …”

In one powerful image, Bugz further explains the concept to Feng through rock art in their virtual world. She says, “Each of these diagonal lines is a different path your life can take. You can take off into these random directions. Get into trouble. Do things that aren’t healthy…It’s up to us to stay true. To keep moving forward on the path that we’re supposed to.”

Feng replies, “Your people really had a lot figured out.”

Kinew doesn’t say he has it all figured out, but what he does know is that he has the best of two worlds: he finds his job as a politician rewarding and he enjoys the spare time he has when he can sit and write.

“To me that’s very meaningful because when I was a young kid…spending some summers in Onigaming, the books we had in the house on the rez were one of my windows into the outside world. So I think it’s very powerful what a book can do and I’m writing these books with the hope they’ll be a window into the outside world for young people, including those in northern Ontario and northwestern Ontario,” he said.

Kinew has no plans right now for a third book in the Bugz series, but he does admit the “door is open.”

Kinew is also the bestselling, award-winning author of the picture book Go Show the World and the memoir The Reason You Walk.

The Everlasting Road, published by Penguin Random House Canada, hits the bookshelves on Jan. 10. The Winnipeg launch with McNally Robinson Booksellers in Winnipeg is on Jan. 25.