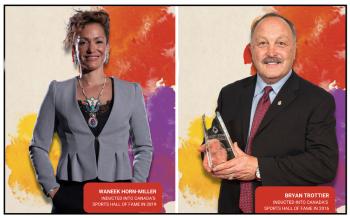 “Reconciliation is about having good relations and the more we know about each other and the more we work together, building on the strengths of each other, the more united and stronger Canada, our home and native land, will be.” — hall of famer Wilton Littlechild
By Sam Laskaris
Local Journalism Initiative Reporter
Windspeaker.com

A new Indigenous-themed exhibit offered by Canada’s Sports Hall of Fame is now live and attracting plenty of attention.

The Indigenous Sport Heroes Education Experience, which was officially launched earlier this week, is a digital multimedia exhibit which showcases 14 Indigenous individuals that have been inducted into the hall of fame.

It is intended to be viewed as a book, with 14 chapters, each one detailing the stories and accomplishments of Indigenous hall of famers.

Cheryl Bernard, the president and CEO of Canada’s Sports Hall of Fame, said hall officials have been blown away by the early response to the exhibit.

Just one day after the exhibit was launched it had generated a total of 11.3 million engagements, which includes not only the number of people who visited the exhibit through the website but also all hits via news articles and social media.

“It’s confirmation and affirmation that this is valuable right now and that people see value in connecting sport and reconciliation in our country right now,” Bernard said.

Wilton Littlechild, one of the commissioners of the Truth and Reconciliation Commission of Canada and a Hall of Fame inductee himself, believes the exhibit will be extremely beneficial.

“Canada's Sports Hall of Fame has a very important role to play in advancing peace and reconciliation and one of the ways is to tell the national story about Indigenous athletes in history,” he said.

Littlechild, a member of Ermineskin Cree Nation in Alberta, is a former MP and was an exceptional athlete himself. While at the University of Alberta he was a member of the school’s football and swim teams.

Littlechild, who was inducted into Canada’s Sports Hall of Fame via the Builder category in 2018, was one of the founders of the North American Indigenous Games.

He was also a key figure in bringing the World Indigenous Games to Alberta in 2017.

“Reconciliation is about having good relations and the more we know about each other and the more we work together, building on the strengths of each other, the more united and stronger Canada, our home and native land, will be,” Littlechild said.

The Indigenous Sport Heroes Education Experience was purposely launched Aug. 9, to coincide with the International Day of the World’s Indigenous Peoples.

Its genesis, however, can be traced back to this past October when hall officials hosted a virtual Indigenous Summit.

That event included the six living Indigenous hall of famers, as well as family members of the other Indigenous inductees who are no longer alive.

Conversations during the summit helped hall representatives establish a 10-year vision for their Indigenous sport and reconciliation projects.

The Indigenous Sport Heroes Education Experience is one of these ventures.

Bernard is thrilled it has now come to fruition, following months of planning.

“Finally, people are able to see what the book looks like,” she said. “The early feedback has been very supportive, from our stakeholders and our supporters.”

Bernard said hall officials realized why a project such as this was vital once they heard stories of the Indigenous hall of famers and their family members at last year’s summit.

“That’s when we realized these stories will have an impact on youth, and not just on youth, but on everybody across the country,” she said.

Though the exhibit can now be viewed through the hall website, the plan is to eventually have it made available, starting in September, to the 450,000 teachers across the country who instruct students from kindergarten through Grade 12.

The goal is to have the five million students in those grades view the exhibit.