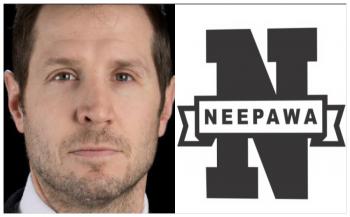 “If they fight it in the hockey rink, then they’re going to have success off the ice and away from the arena.” — Waywayseecappo Wolverines team governor Morley Watson
By Adam Laskaris
Local Journalism Initiative Reporter
Windspeaker.com

The Manitoba Junior Hockey League’s Neepawa team has announced that the word “Natives” will be removed from its name and logo, which bears a strong resemblance to the logo of the NHL’s Chicago Blackhawks.

The team made the announcement on its website, stating its plan includes “research and input from different community members, stakeholders and fans of the Club.”

“Going forward, we want the focus to be on the work we do in our community and our commitment to improving on the ice as we prepare for the upcoming season,” the statement continued.

The name change isn’t immediate, however. It’s not expected to come into play until the 2021-22 season.

In an email to Windspeaker.com, MJHL Commissioner Kevin Saurette cited “logistical, legal, and financial” reasons for why the change won’t be in place this upcoming year. “We are in full support of their decision to move away from the name and logo,” Saurette added.

An official return to play plan has not been announced for the league, but it is expected to be available soon for a September return.

The team’s alternate logo, a black-and-white N with “Neepawa” emblazoned across the front, could reasonably see an increased usage in the meantime.

Teams in the league include the Waywayseecappo Wolverines, located on the First Nation of the same name, and the OCN (Opayasak Cree Nation) Blizzard, which plays just outside of The Pas, Man.

Wolverines team governor Morley Watson was one of the people consulted by Ken Waddell, Neepawa’s governor, on the rebranding.

However, Watson said he felt that his opinion wasn’t necessarily the most important one to be heard.

“My thoughts would be secondary to the community [surrounding Neepawa],” he said, referencing the nearby Sandy Bay First Nation as a group that Watson would like to see included in the process. Neepawa is located about 200 km west of Winnipeg.

While Watson said he didn’t find Neepawa’s name as “signifying any race of people”, he said the move was a start towards governing bodies such as the MJHL, Manitoba Hockey and Hockey Canada taking issues of racism more seriously.

“If they’re going to address racism, address all of it,” Watson said. “More importantly, the attitudes of players, officials, fans and executives.”

“I realize it’s going to be a slow process, but you have to start somewhere, just on the education of racism... If they fight it in the hockey rink, then they’re going to have success off the ice and away from the arena.”

Neepawa’s planned change comes as the result of a mid-July meeting of Manitoba Hockey governors that could give Hockey Manitoba the authority to remove controversial minor and amateur hockey team names, even if teams are not willing to make the change themselves.

“As offensive as names can be, I think that’s only part of the issue that First Nations hockey players face in the game of hockey,” Watson said. “There’s always more you can do.”

“If any members of the MJHL community feel excluded, or that they are not welcome, respected or supported, based on race, religion, gender, sexual orientation, socioeconomic background, etc., then it means we need to do more,” Saurette said. “We continue to listen and learn as we prepare to further act during the upcoming season to ensure we are getting it right.”

“It’s important to have a league message, rather than just an individual one,” he said. “Everybody needs to stay safe, and it’s a coach’s responsibility to provide that environment.”

With his hire announced more than two weeks ago, Keane enters the first year of his tenure with OCN after nine seasons with the Winnipeg Blues from 2011-19. Keane is soon making the journey about seven hours north from his usual home of Winnipeg for the steps to begin the 2020-21 season.

Keane said it’s important to make sure that his team is established as a positive asset in the community.

“I want to make sure that we’re getting the environment set up, and meet all the community leaders and try to network out and make sure we’re very much a part of the community,” he said.

However, he’s expecting the COVID-19 pandemic to throw a bit of a wrench into those plans. “It’s an area where we have to be diligent as educators, as coaches, as leaders to make sure we’re abreast of all different situations that arise,” he said.

Neepawa’s team representatives did not respond to a request for comment.