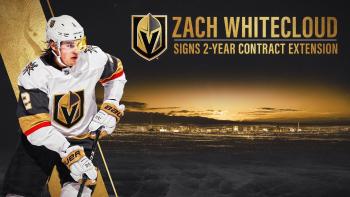 “We were playing really good hockey. Under coach Peter DeBoer we were buying into the team game.” — Zach Whitecloud
By Sam Laskaris
Windspeaker.com Contributor
LAS VEGAS

Plenty of uncertainty is circulating around professional sports these days.

That includes in the National Hockey League, which has had its 2019-20 season placed on indefinite hold earlier this month due to COVID-19 concerns.

It remains to be seen whether the league will resume in the coming weeks or months and whether a Stanley Cup champion will be crowned this year.

Like all other NHLers, Vegas Golden Knights’ defenceman Zach Whitecloud is in a state of limbo. But he’s relieved to know what his future will look like for the next couple of years.

That’s because Whitecloud, a member of Sioux Valley Dakota Nation in Manitoba, signed a two-year contract extension on Sunday with the Golden Knights, worth a total of $1.45 million (U.S.).

“Obviously it’s exciting news and something that I can tell my family and friends about,” Whitecloud said.

Whitecloud, 23, had inked his first pro contract in March of 2018 with the Golden Knights.

Though he was on an athletic scholarship at Minnesota’s Bemjidi State University at the time, Whitecloud decided to leave school early in order to turn pro. He had two years of collegiate playing eligibility remaining.

Virtually every single NHL franchise had expressed some interest in Whitecloud. He opted to sign with Vegas, which was in its first season of operations.

Whitecloud did end up playing his first NHL game with the Golden Knights in April of 2018. Though the Vegas squad did advance all the way to the Stanley Cup finals that year, Whitecloud was not eligible to suit up for the playoff run since he was not on the team’s reserve list by the league’s trade deadline in late February that season.

He registered 28 points, including six goals, in 74 regular season outings. Whitecloud then added 15 points in 22 playoff matches as the Wolves advanced to the AHL championship series, won by the Charlotte Checkers.

As for this season, Whitecloud bounced between the Wolves and Golden Knights. He appeared in 16 NHL contests and had become a regular in the Vegas lineup when the league suspended play earlier this month.

Though his entry-level contract with the Vegas organization was expiring at the conclusion of this season, Whitecloud said he was not worrying about signing a new deal.

“It wasn’t something I was focusing on,” he said. “I was just focusing on playing hockey and helping the team win.”

Whitecloud said he had not set any sort of timeline to get a new contract done.

“That stuff takes care of itself,” he said. “It can happen at any time. I’m extremely happy that it is done now.”

Like all other NHL players, Whitecloud was instructed to self-isolate for 14 days after the league announced it was suspending play.

He decided to stay in Las Vegas instead of trying to fly home to his home in Brandon, Man. Plus, he didn’t want to make the lengthy trek by driving.

For now, Whitecloud is on his own and trying to remain healthy and in shape.

How has he been passing the time?

Plus, he got a special delivery from his mother on Monday as she mailed him his Xbox.

“I’ve been putting in some work on that,” Whitecloud said, adding he can play remotely with friends.

Whitecloud though admits he does miss the life of being an NHL player, especially the camaraderie with his teammates.

“You miss seeing the boys every day,” he said. “But you text everybody all the time.”

Whitecloud is also disappointed the Golden Knights had their season suspended because the team was on a bit of a roll.

Vegas was sporting a 39-24-8 record, good for third place in the league’s 15-team Western Conference, when NHL action was halted. The team had 11 regular season games remaining and many expected to the team to have a lengthy playoff run.

The Golden Knights were one of the league’s hottest teams following the mid-January hiring of a new coach.

“We were playing really good hockey,” Whitecloud said. “Under coach Peter DeBoer we were buying into the team game.”

Before his collegiate and pro career, Whitecloud was a junior hockey star in his home province.

He played two seasons with the Virden Oil Capitals in the Manitoba Junior Hockey League.

He was named to the league’s second team all-stars in 2015-16 after he earned 40 points in 59 regular season games.