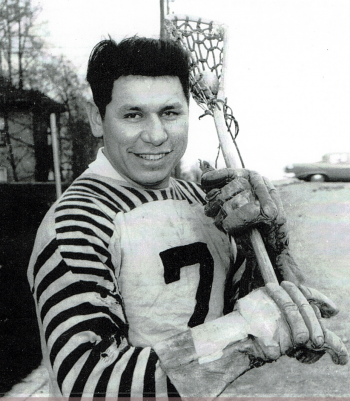 “Receiving the Order of Sport is a moment that signifies the immense contributions each of these inductees have made to Canada through sport.” — Cheryl Bernard, president and CEO of Canada’s Sports Hall of Fame
By Sam Laskaris
Local Journalism Initiative Reporter
Windspeaker.com

Richard Powless attended a virtual press conference Tuesday, representing his late father Ross Powless, who will be inducted into Canada’s Sports Hall of Fame. The ceremony will be livestreamed Oct. 3.

Ross, a Mohawk who lived in the Six Nations community of Ohsweken in Ontario, is among the 11 2020-21 inductees. He is considered one of the top lacrosse players produced in Canada. All the inductees will receive the Order of Sport Award, the country’s highest sporting honour.

“We are extremely proud (and) a little sad that he couldn’t be here to receive it himself,” said Richard, who spoke on behalf of his family on Sept. 21.

He also played for or coached several other Indigenous and non-Indigenous championship squads at various levels.

Though he was an accomplished player, Ross Powless is one of five people being inducted via the Builders category this year.

In many cases, Ross Powless was the one responsible for putting teams together.

“He organized the men’s teams on our reserve in Six Nations,” Richard said. “And he played with them and won several championships with them. And he was an ambassador for lacrosse right across Canada. He knew a lot of the players.”

Richard Powless said his father was also responsible for bringing in many other lacrosse players to Six Nations to suit up for their successful clubs.

“He recruited players from other communities,” he said. “It really helped other young players come here wanting to play and be a part of that.”

Richard said his father felt there was enough Indigenous talent in the sport to compete at the world levels.

“He spoke about the day when that could happen, when our teams could play at an international level. And he said that there are enough Indigenous players—in those days it was mostly Iroquois—and he hoped to see other Indigenous players from other countries… to someday play at the world level.”

Richard said his father would have been thrilled that lacrosse is returning as a sport to the Summer Olympics in 2028 in Los Angeles.

Many individuals are currently working behind the scenes to have an Indigenous club, the Iroqouis Nationals, be included in those Games.

“It’s nice to see it coming back (as a full-medal sport),” said Richard.

Ross Powless was not just respected on the lacrosse floor.

“He was an ambassador for our community of Six Nations as well,” he said. “He helped start the minor lacrosse and hockey in our community. We helped fundraise for the arena that we now have there.”

The rink—Gaylord Powless Arena—is named after another one of Ross’ sons. Gaylord Powless, who died in 2001, was also an extremely talented lacrosse player. He was inducted into Canada’s Sports Hall of Fame in 2017.

Besides Ross Powless, others being inducted into the hall of fame this year as builders are Duncan Campbell (wheelchair rugby), Sheldon Kennedy (hockey), Willie O’Ree (hockey) and Judy Kent (sport administration).

Also, showjumper Eric Lamaze and his horse Hickstead will be inducted via the Team category.

Cheryl Bernard, president and CEO of Canada’s Sports Hall of Fame, praised all the inductees.

“Receiving the Order of Sport is a moment that signifies the immense contributions each of these inductees have made to Canada through sport,” she said.

Bernard also said this year’s inductees have been forced to wait longer than usual for their ceremony because of the COVID-19 pandemic.

“The unprecedented times as of late has meant that these incredible inductees have had to wait an exceptionally long time, nearly a year-and-a-half from when they were announced to the public until their official induction into Canada’s Sports Hall of Fame,” she said. “We could not be more excited that their time has finally come.”

Those interested in watching this year’s hall of fame induction and the Order of Sport Awards livestream can do so for free by registering at orderofsport.ca.