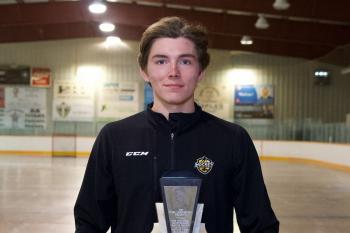 Conner Roulette is this year's male recipient of the Tom Longboat Award.

“It’s a tremendous honour. It’s such a great feeling to be recognized as an Indigenous athlete.” — Conner Roulette
By Sam Laskaris
Local Journalism Initiative Reporter
Windspeaker.com

Conner Roulette hopes to one day find himself earning a paycheque to play pro hockey for a Texas-based squad.

Roulette, a member of Misipawistik Cree Nation in Manitoba, was selected by the Dallas Stars in the fourth round, 111th over-all in the National Hockey League’s Entry Draft this past July.

But it was Roulette’s efforts at a Texas-based tournament earlier this season that played a major role in him being recognized with a prestigious award.

It was announced this past week that Roulette was selected as the male recipient of this year’s Tom Longboat Award.

Besides becoming an NHL draft pick, another highlight for Roulette in 2021 was helping the Canadian squad capture the gold medal at the International Ice Hockey Federation’s world men’s under-18 tournament.

A pair of Texas cities, Frisco and Plano, co-hosted the 10-nation tournament, which concluded in early May.

Roulette, 18, appeared in seven tournament matches and earned five points, including a pair of goals.

“Any award you win you take a lot of pride in that,” Roulette told Windspeaker.com in a phone interview on Tuesday night from Traverse City, Mich.

Roulette flew to the Michigan city earlier on Tuesday to compete in the five-squad NHL Prospects Tournament, which begins on Thursday and continues until Sept. 20.

Roulette arrived in Traverse City a day after getting his first taste of NHL life. He participated in a four-day Stars’ development camp, staged in Frisco, home of Dallas’ practice facility, which concluded on Monday.

Métis curler Kerri Einarson, who won a pair of Canadian curling championships earlier this year, was named the female recipient of the Longboat award.

The Tom Longboat Award, named in honour of the legendary Onondaga distance runner from the Six Nations community of Ohsweken, is annually presented to the top Indigenous athletes in Canada.

Though it was only announced last week that Roulette was the male winner of the award, he has known for about a month.

Officials from the Aboriginal Sport Circle (ASC), the national governing body of Indigenous sports in Canada, mailed him his award.

“It’s a tremendous honour,” Roulette said. “It’s such a great feeling to be recognized as an Indigenous athlete.”

Both Roulette and Einarson will be recognized for their Longboat wins during Canada’s Sport Hall of Fame induction ceremony, which will be livestreamed Oct. 3.

Both athletes have pre-recorded acceptance speeches for the online ceremony.

Roulette has spent the past two seasons, including the pandemic-shortened 2020-21 campaign, with the Western Hockey League’s Seattle Thunderbirds.

Since he has a couple of years of junior eligibility remaining, Roulette fully expects to be sent back to Seattle for some further grooming this season.

Though he has not been officially told he will receive an invitation to the Stars’ main training camp, which begins later this month, Roulette will return to Dallas following the prospects tourney.

“Obviously I’m hoping to get an opportunity to be at their main training camp and get that experience as well,” he said.

Roulette, who is 5-foot-10 and weighs about 180 pounds, also realizes he needs to bulk up a bit in order to play at the pro level.

And he knows he can add weight.

“I need to work on my size and strength,” he said. “Obviously I want to get stronger before I’m up against guys that have worked their whole lives to get better.”

Roulette also has some advice for other young Indigenous players.

“My message to other Indigenous hockey players is to keep working hard, keep practicing, and keep focused on your goals and don’t let anybody tell you that you can’t achieve them,” he said.

The Tom Longboat Awards were first handed out in 1951, two years after Longboat died. The ASC has managed and presented the award since 1999.

Longboat had earned worldwide acclaim after winning the Boston Marathon in 1907. He also represented Canada in the marathon at the 1908 Summer Olympics but collapsed from exhaustion about 10 kilometres from the finish and did not complete the race.

As for Einarson, who is from Camp Morton, Man., her year started off on a high note early on as she won her second straight Canadian women’s curling title, skipping a rink to victory at the Scotties Tournament of Hearts in February.

That event was staged in Calgary. She returned to the Alberta city a month later and teamed up with Newfoundland’s Brad Gushue to win her first Canadian mixed doubles championship.