This time, things must be different, says Phil Fontaine as he prepares for visit with the Pope 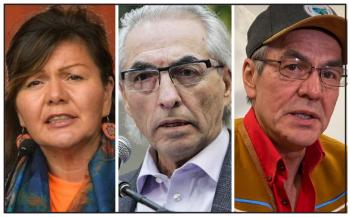 “We’ve got to be very careful with our words and do it in a most respectful way …Our languages are very soft and loving and that’s how we’re challenged, because, with this whole issue, residential school brings up a lot of issues and emotions for us.” — Assembly of First Nations NWT Regional Chief Norman Yakeleya
By Shari Narine
Local Journalism Initiative Reporter
Windspeaker.com

Phil Fontaine is making a return trip to the Vatican. This time, as part of an Assembly of First Nations delegation, he’s hoping the results will be different from the last time he went to visit the Pope.

“It would be a terrible waste of time if the Pope was to commit, as he has, to coming to Canada and not issue an apology when he’s here,” said Fontaine, former AFN national chief and a negotiator of the Indian Residential School Settlement Agreement (2007).

“We have great expectations regarding our visit to the Vatican.”

Times have changed, he said, from when he was part of a private delegation that met with Pope Benedict XVI in 2009. At that time, he was willing to accept the pontiff’s expression of deep regret for the abuse inflicted on First Nations children who attended residential schools.

“So the circumstances are so different for this visit. We already know that as we travel to Rome, the Holy Father has committed to visiting Canada to speak directly to Indigenous peoples here in our homeland. It is our hope that the Holy Father will issue an apology when he is in Canada,” said Fontaine.

The apology from the Pope is Call to Action #58 in the TRC’s final report, which was delivered in 2015 on the legacy of residential schools.

Fontaine will be co-lead as delegation spokesperson with Chief Wilton Littlechild for the AFN’s one-hour audience with Pope Francis on Dec. 20. Littlechild was one of three commissioners of the TRC.

The messages to be delivered are still a “work in progress,” said Assembly of First Nations NWT Regional Chief Norman Yakeleya, who is delegation lead. He is also the AFN portfolio holder for residential schools.

“We’ve got to be very careful with our words and do it in a most respectful way …Our languages are very soft and loving and that’s how we’re challenged, because, with this whole issue, residential school brings up a lot of issues and emotions for us. We want to do our best on behalf of the people we represent in Canada and our people,” said Yakeleya, who is also a residential school survivor from Inuvik.

The Pope’s willingness to come to Canada will be addressed, as well as where he may visit in hopes of making an apology. Among those possible locations is Kamloops.

“The way we are looking at this is that he is requesting our nations—the Inuit, the Métis and the Assembly of First Nations. The Holy Father is the head of the state. We see this from the position of a nation-to-nation meeting and that the Holy Father is inviting us and we accepted,” said Yakeleya.

Yakeleya said the AFN will coordinate with the delegations of the Métis National Council (eight representatives) and Inuit Tapiriit Kanatami (seven representatives), who have also been granted one-hour audiences with the Pope in the days previous to the AFN meeting.

There will also be a plenary session on Dec. 20. The delegations, who will be joined by other people, will not be able to speak. The Pope will speak.

Also part of the delegation is Fred Kelly, Ojibways of Onigaming First Nation, as spiritual advisor.

The delegation will be in Rome from Dec. 14 through Dec. 21.

The costs for the delegation will be covered by the Canadian Conference of Catholic Bishops. It was this group that officially invited AFN to attend.

“We recognize that the apology is one important matter, but we are also very focused on steps beyond the apology. And there’s been a discussion around reparations, access to records, unmarked graves, the relationship between the Catholic church and our community, and how that particular relationship will be addressed after our visit and, of course, hopefully an apology when the Holy Father comes to Canada,” said Fontaine.

“We do this to seek true reconciliation. We pray to God. We pray that the Holy Father will do the right thing,” said Yakeleya.