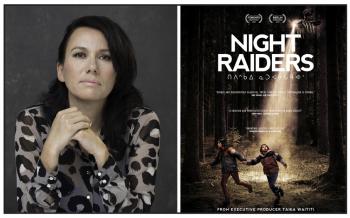 “The fight is something that's ever present for Indigenous people and that it's almost like we exist to resist in a way, because we've had to.” — writer/director Danis Goulet
By Adam Laskaris
Local Journalism Initiative Reporter
Windspeaker.com

Danis Goulet couldn’t help but get emotional this week with the launch of her first feature-length film.

The Saskatchewan-born Cree/Métis director and writer is the creator of the dystopian thriller Night Raiders, which was released in 80 theatres across Canada on Friday.

“I saw the list of theatres yesterday. I totally started to cry,” Goulet said in an interview with Windspeaker.com.

“It had been so many years of getting to this place. [It was] a long journey of making the film, but it also just made me reflect on how many people have fought for so much for so long.”

It’s inspired in part by Canada’s residential school system, but brings in a futuristic element as the film is set in 2043.

“A military occupation controls disenfranchised cities in post-war North America,” the film’s synopsis reads. “A desperate Cree woman joins an underground band of vigilantes to infiltrate a State children’s academy and get her daughter back. Night Raiders is a female-driven dystopian drama about resilience, courage and love.”

Goulet also said that she’s been inspired by Indigenous populations around the world, which is one of the reasons why Night Raiders features both actors and production staff from New Zealand.

Academy Award-winning actor and director Taika Waititi hopped on as an executive producer, who then helped loop in other talent to make the film’s production a global one.

“What I've always been thinking about is sort of this relationship between the fight, and the resistance and really love,” Goulet said. “The fight is something that's ever present for Indigenous people and that it's almost like we exist to resist in a way, because we've had to.”

Goulet sees the film as being a starting place for people to learn more about Indigenous history across Canada, but encourages further research into the 94 Calls to Action of the Truth and Reconciliation Commission.

“I hope that it's an inviting space that really opens up a fresh entry point for audiences to engage in really fundamental questions about the founding of Canada,” Goulet said. “I hope it also opened their eyes to the impact of colonial policies on Indigenous life and I hope they come away with a better understanding of what that impact was.”

Goulet began working on Night Raiders in 2013, and said it’s been quite the ride to eventually get the movie through all the stages of production.

“The writing process was really daunting,” Goulet said. “In every project, in some ways, you're writing about yourself and your own experience and so there are just things that, I guess, you uncover in that process.”

Goulet said that the majority of the filming was done in 2019, but post-production was halted in March 2020 due to the COVID-19 pandemic.

“I think it was really challenging,” Goulet said. “But to get here and to have waited this out a little bit and to know that theatres are open and people can have this experience is such a gift after this pandemic year.”

Goulet said a lot of the film’s work came through learning more about military history and how to accurately convey state-run oppression in her work.

“I was researching all of the tools of warfare that aren't necessarily called tools of warfare, like starvation, disease and the creation of labour camps,” Goulet said. “I looked at the rise of Hitler and all of the things that happened when an oppressive regime comes in and what are the most effective tools that they use.”

“I feel like the film was able to talk about quite a lot of the policies and the way that they impact Indigenous life,” Goulet added.

“They were incredibly courageous in where they were willing to go in the telling of the story,” Goulet said. “We just would not have a movie without their courage and commitment and their talent to bring the story to the screen.”