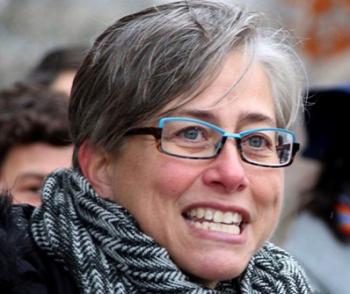 Margaret Froh, president of the Métis Nation of Ontario

“We want MNO to have every opportunity, and we feel that this is laid out in a way that they will have that opportunity.” — Louis De Jaeger of the Métis Nation British Columbia
By Shari Narine
Local Journalism Initiative Reporter
Windspeaker.com

The MNO had been “suspended” in 2020 by the former MNC president over Métis Nation Ontario’s registration of members from communities that many considered outside the boundaries of the Métis Homeland. The suspension was vigorously disputed by MNO, and the controversy embroiled the member MNC governments in a war of words, with factions entrenched in opposing positions over who is eligible to be Métis within the greater Métis Nation.

To resolve the issue, on Sept. 29 at the general assembly, delegates passed a motion to establish a panel comprised of representatives appointed by the four Métis Nation governments (including MNO) and experts. The panel will gather information and present findings and recommendations on a number of issues to the MNC Board of Governors and general assembly within a 12-month timeframe from the initial meeting.

According to the motion, the 2018 probation of the MNO is “in abeyance” until the conclusion of the process and pending the findings and recommendations of the panel.

The panel also has the mandate to “review the history of the seven Ontario communities through the lens of the national definition and contemporary Métis governance.”

“What we’re putting forward here is a process; something that wasn’t there before,” said Louis De Jaeger of the Métis Nation British Columbia.

“We want MNO to have every opportunity, and we feel that this is laid out in a way that they will have that opportunity.”

Also on Sept. 29, the Manitoba Metis Federation (MMF) officially withdrew from the MNC, stating membership as the reason.

Besides MNBC, the MNO has also seen support from the Métis Nation governments of Alberta and Saskatchewan in an application under the Canada Not-for-Profit Corporations Act in the Ontario Superior Court.

It was the alleged expanded definition of membership that led to the MNC putting the MNO on probation in 2018, which then led to the disputed suspension. However, on July 21 the court directed that “the resolution in question did not suspend the MNO” from the MNC.

The legal action also led to a court-approved agenda for last week’s general assembly, with the status of the MNO as one of the items to be discussed. That same court order allowed the MNO to vote on that agenda item.

Through the new panel, the MNO will have the opportunity to present the work it “engaged in” with the Ontario government to identify the additional seven historical Métis communities from which MNO has drawn members; its ongoing registry review process; and the research and work it has undertaken to advance and secure the rights, interests and claims of Métis in Ontario.

Margaret Froh, president of the MNO, said the resolution to establish the expert panel provided the process to allow the MNO to present its findings as set out in a report “in a respectful way” and perhaps the work could be completed before the one-year deadline. The report was done to assert Métis rights in Ontario, she said.

Froh noted, however, that more research with the MNO’s registry would be required to show connections to western Métis, as that had not been the intent of the report. The MNC former president and supporters, and the MMF leadership and its membership, contend that to be Métis one must have ancestral connection to the Red River Métis in Manitoba.

Of the 26,822 citizens on the Ontario Métis registry, more than 20,000 have “complete files” that show their connections to historic Métis communities in Ontario. Approximately 34 per cent can prove connection to Métis ancestry in western Canada, she said.

Michelle Leclerc, vice-president of the Métis Nation-Saskatchewan, said she did not doubt that the people on the MNO registry were Section 35 rights holders.

“We can name our historic Métis communities in Saskatchewan … We know from the report from Ontario… 22 per cent of the citizens in Ontario reach back to … what I would consider the historic Métis community—Saskatchewan, Red River, Alberta. So we really need to think about that …Maybe there’s a way of working through that. Métis Nation Ontario obviously represents Métis citizens, (but) they may not all be Métis people,” said Leclerc.

McCallum said the resolution was a starting point.

The motion was not passed unanimously.