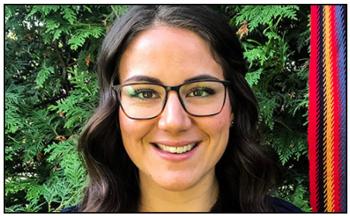 Another national Indigenous organization has a woman at its helm.

Caron’s selection makes her the second woman elected to lead a national Indigenous organization. RoseAnne Archibald was elected national chief of the Assembly of First Nations on July 9, the first ever woman in that position.

Caron won the position in the MNC election on the third ballot, defeating Gerald Morin, past vice-president of the Métis Nation-Saskatchewan, by a vote of 25 to 15. Caron had previously served a four-year term as provincial Métis youth chair and minister responsible for youth for Métis Nation British Columbia (MNBC).

However, if delegates had followed the recommendations of the electoral committee it appointed on the first day of its two-day court-ordered special sitting of the MNC general assembly, the outcome might have been different.

Barner said the changes to the election process were necessary because, with the Manitoba Metis Federation withdrawing from the MNC on Sept. 29, that left 40 voting delegates and the potential for a tie.

To become the next president, the winner had to receive 50 per cent of the vote plus one.

The recommendation that the president of the MNC was a decision that could be taken out of the hands of the elected delegates didn’t sit well with some.

“There is no way I will ever agree in regards to one person deciding a process where the delegates are here. Democratic process needs to take place and it should be here,” said Métis Nation-Saskatchewan President Glen McCallum. “I for one will never stand for that.”

“I believe it should be this table making the decision, even if we have to go several rounds, but it’s up to this table of leadership to make the decision,” said Lissa Smith, MNBC vice president.

Even though the electoral committee had representatives from the remaining four Métis Nation governments— Saskatchewan, BC, Alberta and Ontario—some of those representatives were technicians and not elected members, Smith pointed out.

Barner, for example, is a senior executive officer for the Métis Nation of Alberta and not an elected representative.

In the end, a split decision of 20-19 saw delegates agree to take the vote to a third ballot before, ultimately, putting the decision in the hands of the electoral committee and the chief electoral officer if they were unsuccessful in electing a president.

The names of three nominees stood as replacement for Clement Chartier, who held the position of president for 18 years. Chartier chose not to seek another term.

Dean Gladue, present minister in the MNBC, joined Caron and Morin in the race. However, Gladue was dropped after the initial ballot as he acquired the least amount of votes with five. Caron led the way on the first ballot with 20 votes to Morin’s 15.

On the second ballot, Caron and Morin both received 20 votes.

On the third and final ballot, Caron managed to swing the support her way.

“Yesterday we turned a new page and today we begin a new era: one of accountability, of transparency and of governing on behalf of the entire Métis Nation,” said Caron in her acceptance speech to applause.

“We have an incredible opportunity to redefine the ways we work together so that we can move forward as equals,” she said.

While Caron’s political experience is limited, she has valuable experience as a consultant in Indigenous research and program evaluations on a wide range of subjects.

Caron was nominated for the position by Métis Nation of Ontario (MNO) President Margaret Froh.

“We need someone in that leadership role that understands the role that MNC should be playing in support of all of our Métis governments, not undermining them. And Cassidy truly gets that. She won't stand in the way of Métis governments. She'll support us. She’ll fight for us,” said Froh.

One of the issues that will fall on Caron’s agenda is whether all of MNO’s tens of thousands of members fit the 2002 definition, adopted by the MNC, as to who is a Métis. That issue has been a point of contention for the past few years.

On Sept. 29, the delegates passed a resolution establishing a panel to examine the status of the seven additional Métis communities and their members accepted by MNO. The panel has up to one year to present its finding and recommendations to the MNC Board of Governors and general assembly.