Environmental source of deadly blastomyces yet to be discovered 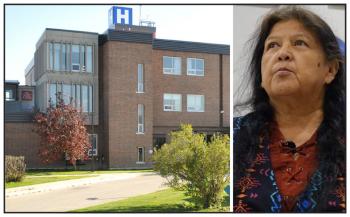 Four children were airlifted to Ottawa’s Children’s Hospital, seven adults are in hospitals in Timmins, Sudbury and Sault Ste. Marie, and nine are in the Hearst hospital. Chief Ramona Sutherland (right) and the Constance Lake First Nation council declared a state of emergency Nov. 22.

“To me it could have been just the perfect storm through climate change raising those temperatures creating such an environment for this to thrive.” —Councillor Wayne Neegan, Constance Lake First Nation
By Shari Narine
Local Journalism Initiative Reporter
Windspeaker.com

Testing is still underway to determine the source that spawned a lung infection from blastomyces fungus and has killed three people in Constance Lake First Nation in northwestern Ontario. Results garnered to date from 11 samples—about one-third of the sampling collected—are no closer to identifying the source, says Councillor Wayne Neegan.

Presently, four children who were airlifted to Ottawa’s Children’s Hospital with symptoms. There are seven adults in hospitals in Timmins, Sudbury and Sault Ste. Marie. The remaining nine hospitalizations are in nearby Hearst. Ont. in acute care at the Hearst hospital.

There are 95 people under investigation, and besides the three individuals who died with blastomyces, there is one other confirmed case, said Neegan.

All 11 environmental test samples came back negative, he says, and he does not know if any of those samples are from the nearby Lecours lumber mill.

When the first diagnoses of blastomycosis started turning up, community members raised concerns that the source could be Lecours Lumber, located just south of the community.  Woodpiles provided to the reserve from Lecours lumber mill along with sawdust piles and a recent burn by Lecours were all noted as source possibilities by community members.

“We want (community members) to rest assured that we tested these areas, because the community had those concerns,” said Neegan.

According to its website, the Lecours Lumber Co. Ltd. is a privately-owned company and presently owns and operates a modern sawmill and planing facilities. Its total annual softwood lumber capacity exceeds 100 million board feet.

Lecours Lumber did not reply to a request from Windspeaker.com for an interview.

In a statement to Windspeaker.com, Indigenous Services Canada confirmed those initial negative test results, which were analyzed by Sporometrics Inc., a Toronto-based laboratory specializing in mould and fungi.

“This result is not abnormal due to the difficulty in isolating blastomyces spores from environmental samples. Additional test results are forthcoming,” said Nicolas Moquin, spokesperson for ISC.

“The community rests next to a lake. It’s surrounded by bodies of water. It potentially could be in any one of these areas. To me it could have been just the perfect storm through climate change raising those temperatures creating such an environment for this to thrive,” said Neegan.

Blastomyces lives in rotting materials and more acidic soil and thrives in damp areas. It does not thrive in winter weather.

The fungus is spread when soil or rotten wood is disturbed by people, animals or off-road vehicles like four-wheelers. Spores are spread through the air. The fungus is not spread by person-to-person contact.

“The number of cases is very concerning and the department is mobilizing all efforts to support the community,” said Moquin.

When the first blastomycosis death was determined, the state of emergency was declared to ensure the community received all the resources and support it needed from the health sector, says Neegan.

The difficulty in quickly detecting a source of the fungus, he says, is that those members who have been identified with probable blastomycosis have no obvious connections.

ISC is providing surge nursing support in the community with an additional nurse and paramedic to boost support for home visits and wellness checks, as well as the delivery of influenza and COVID-19 immunizations. An additional ambulance has been stationed in the community and another is available to be deployed from Kapuskasing if further support is required.

ISC will provide funding for a vehicle and driver to transport individuals to and from the hospital for follow-up testing as required. Transportation for families supporting patients in hospitals out of the region will be covered by various ISC funding, including Non-Insured Health Benefits and Jordan’s Principle.

“Out of an abundance of caution, persons from Constance Lake who present for care are being assessed for blastomycosis. Overall, the symptoms of those who are presenting for assessment more recently appear to be decreasing in severity,” said Moquin.

An ISC representative, who arrived in community on Nov. 23, will provide on-the-ground support for as long as necessary, says Moquin.

ISC is working directly with Chief Sutherland; the Matawa Tribal Council; the Weeneebayko Area Health Authority; the Porcupine Public Health Unit; the Ontario Ministry of Health; Indigenous Affairs Ontario; and other health partners to identify and address community needs and ensure those affected have access to the resources they need.

High traffic areas, such as trails leading to the post office, store and band office, are being tested. However, testing will include the entire 120-hectare community site, says Neegan.

“Our community members, they have an intimate relationship with the environment. They’re often doing activities with their families in the bush and stuff,” he said.

“We’ll dig until the ground is completely frozen. I figure another two weeks before things are unattainable,” said Neegan.

Neegan says testing will begin in select homes once the environment and priority areas have been sampled. Testing may be extended to include every home.

However, ISC says the cases of blastomycosis have not been linked to homes and “the investigation is not leading us in that direction.”

A work from home order was issued last week by chief and council shutting down the band office and schools to allow people to go to the hospital for testing if they had symptoms or to help out family members.

Neegan says the order will be examined on a week-by-week basis, but he anticipates it will be lifted next week.

There are concerns, he admits, about students falling behind in their classwork as connectivity in the community is an issue.

While “a few concerned community members” have been calling for an evacuation, Neegan says chief and council are not ready to do that.

A crisis team has been established and evacuation procedures are being put in place in case it becomes necessary. A list of the most vulnerable, including Elders and children, who would be the first to move out of the community, is being compiled. If it comes to an evacuation, Neegan says communities such as Hearst, Timmins and Kapuskasing may be willing to offer temporary shelter.

“We feel there’s still some hysteria surrounding this. Some do want to evacuate. We’re trying to tell them rest assured this is not a situation where we’re at at the moment,” said Neegan.