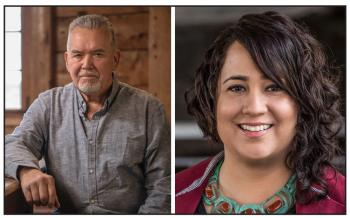 “Some of those stories were deeply troubling, while others were inspiring… stories that often required a lot of emotional strength, generosity and bravery to share.” — director Kevin Eastwood
By Sam Laskaris
Local Journalism Initiative Reporter
Windspeaker.com

A historical documentary series with prevalent Indigenous themes is ready to be viewed by the public following a laborious effort that included more than 70 interviews and the research of more than 10,000 archives.

British Columbia: An Untold History is a four-part series. It will air on the province’s Knowledge Network, starting Oct. 12 at 9 p.m. PDT.

The series will also be streamed for free online nationally at www.knowledge.ca

Prior to that, however, the first episode of the series, which is titled “Change + Resistance”, will be shown this Friday, Oct. 8 at the Vancouver International Film Festival (VIFF).

That screening, which will be held at Vancity Theatre, will be part of the Creator Talk program at VIFF, which began Oct.1 and continues until Oct. 11.

Gitxaala producer Leena Minifie and director Kevin Eastwood will be at Friday’s screening and talk to provide insights into the series, which was commissioned by the Knowledge Network.

Minifie said about 100 people were on a short list of prospective interviewees for the series. And it took a couple of years to interview the more than 70 individuals that were eventually interviewed.

Four years of research also went into the project. Besides numerous interviews, the series includes footage of the province’s landscape, as well as archival photography and film artifacts.

Minifie said it was important to make this series about the Indigenous past.

“Most of the history now focuses on a male and European centric lens,” she said. “But this is our history. We wanted to have an inclusive history with voices that are marginalized.”

British Columbia: An Untold History details the province’s history from a diverse and inclusive perspective by having those who lived it and studied it give their analysis of it. Among those featured in the series are Elders, historians, academics and authors.

Minifie is pleased the first episode of the series will be screened at VIFF.

“I think it’s always great to be in film festivals, for audiences that love documentaries and documentary series,” she said.

Minifie said those who made the series faced their share of challenges, especially since early in 2020 when the COVID-19 pandemic began to spread.

“We wanted to do right by everyone and we followed Indigenous protocols,” she said. “During COVID was quite difficult. A lot of First Nations had a lot of emergencies (and were locked down).”

Besides Indigenous voices, the series also includes representative stories from those with Chinese, Japanese, Punjabi, Black and European ancestry.

“As a settler who has lived their whole life in BC and went to school and university here, I thought I knew a lot about this place, but making British Columbia: An Untold History taught me I didn’t really know that much,” Eastwood said.

Eastwood learned quite a bit through various interviews conducted for the series.

“Some of those stories were deeply troubling, while others were inspiring,” he said. “In the end, more than anything, it was the act of hearing these stories be shared—stories that often required a lot of emotional strength, generosity and bravery to share —that made me feel closer to others, and have a more true understanding of what this place is. I hope that the stories we have assembled provide viewers with a similar experience.”

The four episodes in the series take viewers on a journey dating back from the late 18th century to the present time.

The series has four themes. “Change + Resistance”, for example, uncovers the Indigenous resistance to oppression in BC. First Nations persevered through years of brutality and criminalization. “Remember this history is an act of refusal to be erased,” reads the synopsis online at British Columbia: An Untold History | Knowledge.ca

“I think there’s a lot of misunderstanding in the general public,” said Dr. John Elliott, who is a Tsarlip Elder, language revitalization expert and instructor. “People don’t have a real understanding of how much Indigenous people lost through the colonization period.”

As for the second episode, titled “Labour + Persistence”, it explores the history of labour and inequality in BC. First Nations, immigrants and women fought overseas in both World Wars, and then kept fighting for equal rights at home, reads the episode synopsis.

The next episode is called “Migration + Resilience”, which feature the resilience of the Chinese, Japanese and Punjabi migrants, the Doukhobors and American war resisters and the social movements sparked that continue today.

The fourth and final episode, “Nature + Co-Existence”, examines how the history of BC is fused with the history of natural resources. First Nations have worked with non-Indigenous environmentalist to co-exist and protect the land.