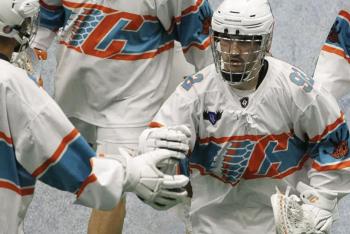 The Six Nations Chiefs have some added incentive to perform well in their own league playoffs this year.

That’s because the squad that ends up winning the Major Series Lacrosse (MSL) championship this season also earns the right to host the 2022 Mann Cup.

Besides the MSL playoff champs, the team that ends up capturing the British Columbia-based Western Lacrosse Association title will also compete in the national senior men’s box lacrosse event.

The MSL winner will host all of the matches in the best-of-seven Mann Cup series, which will be held in September.

Six Nations will commence its playoff schedule today, Aug. 3. The Chiefs will square off against the visiting Cobourg Kodiaks in Game 1 of their best-of-seven MSL semi-final series.

That match will be held at the Iroquois Lacrosse Arena, the Chiefs’ home facility located in Hagersville, Ont.

Just four clubs competed in the MSL this season. Besides the Chiefs and Kodiaks, also taking part were the Peterborough Lakers and Brooklin Lacrosse Club.

The Oakville Rock opted to sit out the 2022 campaign. And two other franchises, the Brampton Excelsiors and Owen Sound Lacrosse, are also on the sidelines while reps from both sides attempt to figure out the logistics and legalities of an Excelsiors’ proposed relocation to Owen Sound.

The start of the MSL was delayed while league officials and those from the Ontario Lacrosse Association battled over what to do about the Brampton and Owen Sound franchises.

The pandemic forced the cancellation of the 2020 and ’21 MSL seasons.

Duane Jacobs, who wears various hats for the Chiefs including serving as the team’s head coach, general manager and president, was pleased to see Six Nations post a league-leading regular season mark of 8-3-1.

“We’ve put ourselves in a good position getting first over-all in the regular season standings and home advantage throughout the league playoffs,” Jacobs said.

The Chiefs will face the fourth-place Kodiaks, who managed to win just two of their dozen regular season outings. Both of those victories, however, were against Six Nations.

And that’s partly why Jacobs thinks it would be unwise to take the Kodiaks lightly.

“I think Cobourg has a good team,” he said. “I don’t think they’re given enough credit when they have a full lineup.”

The Kodiaks will undoubtedly be enthusiatic entering the post-season. They beat the host Chiefs 9-7 on July 26 in the regular season finale for both squads.

“As much as we don’t like losing, we didn’t really have a lot to play for,” Jacobs said.

Six Nations had already guaranteed itself a first-place finish in the standings. And the Chiefs sat out several of their key players for the match.

Nonetheless, Jacobs believes the Kodiaks are capable of providing a stiff challenge to his club.

“I think we know what Cobourg brings as a team,” he said. “I think they’re a pretty athletic team. They can run in transition if you don’t take care of the ball in the offensive zone.”

The Chiefs are no slouches themselves.

“Offensively we have some of the best players in the game,” Jacobs said.

Those who are relied upon to put the ball into the net include Brendan Bomberry, Cody Jamieson and brothers Randy and Austin Staats.

Austin Staats had a team-high 13 goals and also chipped in with 13 assists in just eight matches. And his older brother Randy averaged two points per game, collecting 18 points (five goals and 13 assists) in nine contests.

The Chiefs’ defence and goaltending also earns its share of praise. Six Nations allowed a league low of 98 goals during the regular season.

Between the pipes the Chiefs rely on a pair of netminders who also play at the pro level, in the National Lacrosse League.

Warren Hill stars with the Halifax Thunderbirds while Doug Jamieson toils with the Albany FireWolves.

“I think we have the best tandem in the league,” Jacobs said. “Whoever is in net, I think we can win with both of them.”

The Chiefs have won the Mann Cup six times, most recently in 2016. Six Nations also captured back-to-back championships in 2013 and ’14 and three consecutive titles from 1994-96.