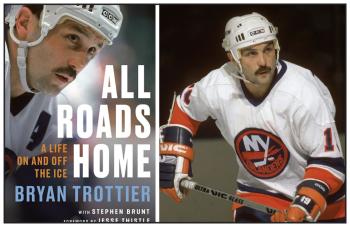 Seven-time Stanley Cup champion Bryan Trottier has published a new book called "All Roads Home: A Life On and Off the Ice."

“There’s always a message in there. That includes the fact you can always come home and that you can chase your dream and don’t forget to ask for help.” —author and former NHLer Bryan Trottier
By Sam Laskaris
Local Journalism Initiative Reporter
Windspeaker.com

Bryan Trottier has added to his lengthy list of accomplishments.

Trottier, who has Métis, Cree and Chippewa ancestry, is a seven-time Stanley Cup champion. He was chosen as the National Hockey League’s MVP for his efforts during the 1978-79 season. And he was inducted into the Hockey Hall of Fame in 1997.

Trottier, who is 66, is now also a published author. His recently released book, which he wrote with award-winning journalist Stephen Brunt, is titled All Roads Home: A Life On and Off the Ice.

Trottier spent a good chunk of his life in the NHL. He played 18 seasons in the world’s premier hockey circuit.

During his playing career he won the Stanley Cup four times with the New York Islanders and then twice more with the Pittsburgh Penguins.

After his playing days were over, Trottier spent 13 more seasons working for pro franchises in coaching and managerial roles.

He won his seventh Stanley Cup in 2001 while he was an assistant coach with the Colorado Avalanche.

Trottier’s last major gig in the NHL was during the 2014-15 campaign when he was an assistant coach with the Buffalo Sabres.

Trottier, who is from the small Saskatchewan town of Val Marie, now lives in the Pennsylvania city of Washington, which is about a 30-minute drive from Pittsburgh.

He continues to do some community work for both the Penguins and the Islanders. He estimates he attends upwards of 25 NHL games in Pittsburgh each season.

And he also keeps close tabs on his 14-year-old grandson Parker, who is making a name for himself averaging almost two points per game for Shattuck-St. Mary’s, a prestigious Minnesota school known for its hockey prowess.

“It’s a tribute to my mom and dad,” Trottier told Windspeaker.com during a phone interview from Ottawa where he was promoting his book. “And it’s an appreciation for all the people who have helped me.”

In the prologue of his book, Trottier writes about his first vivid NHL memory, which was during the spring of 1965 when he was eight. He watched the Stanley Cup final with his parents and saw Montreal Canadiens’ captain Jean Beliveau presented with the world’s most famous hockey trophy.

After seeing Beliveau hug the Stanley Cup, Trottier recalled he told his father he wanted to do the same someday.

That wish became a reality for the first time in 1980 when he was a member of the Islanders’ Stanley Cup winning squad.

Trottier wrote about his recollection of that on-ice ceremony.

“Now, all of a sudden, they were bringing the Cup out of the corner doors in the boards,” he wrote. “Denis Potvin and I went over there, and I remember wanting to hug it, just like Jean Beliveau. I wanted to put my arms around it – so that’s what I did. Denis grabbed one side and I grabbed the other and we both hugged it and stared at each other with crazy smiles on our faces. We both had tears in our eyes.”

Trottier’s 23-chapter book is 277 pages long and published by Penguin Random House Canada. It's available on Amazon and at Chapters-Indigo and other book retailers.

Trottier said the book, which took about five years to finish, went through some major editing.

“Stephen Brunt was awesome,” Trottier said. “He jogged my memory and there were so many stories. We ended up with a 1,400-page manuscript. Condensing that down took a while.”

Trottier is hoping readers of all ages, and even non-hockey fans, enjoy his book.

“There’s always a message in there,” he said. “That includes the fact you can always come home and that you can chase your dream and don’t forget to ask for help.”

Trottier believes Indigenous youth in particular, who have moved away to further their hockey careers, will see that he himself had similar experiences.

“Indigenous kids will relate to it, especially the parts about being homesick and shy,” he said.

Though he’s in his mid-60s now, Trottier continues to lace up the skates occasionally. He plays a handful of games each season with an NHL alumni squad featuring Indigenous players.

And he’s enjoying his current life in Pennsylvania.

“I’m not as homesick these days, but I do miss Mom and Dad,” he wrote. “I honour them by living life to the fullest every day. I have their memories, my Val Marie Canadian roots, and the importance of hard work, strength and family. I also have their lessons.

“Mom’s ‘treat people the way you want to be treated’ and ‘you can only make a first impression once.’ Dad’s ‘firm handshake and look them in the eye’ and ‘A for effort is the most important grade on your report card’.”