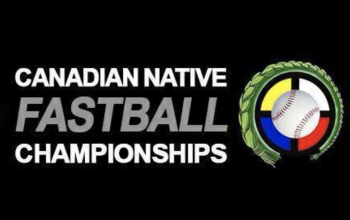 “The pandemic has had a big effect on everybody. A lot of our people aren’t as financially set as they were before. And the cost of travel has gone up exponentially across Canada.” — Harley Desjarlais, chair of the organizing committee for host Prince George River Kings
By Sam Laskaris
Local Journalism Initiative Reporter
Windspeaker.com

Following a lengthy delay caused by the COVID-19 pandemic, the Prince George River Kings will finally get to lay out the welcome mat this week.

The men’s team, based in Prince George, B.C., is hosting the Canadian Native Fastball Championships. They begin on Friday (July 29) and are scheduled to continue until July 31.

If there is inclement weather, organizers are prepared to extend the tournament by a day and have championship matches on Aug. 1.

The River Kings have been trying to host the national tournament since 2020. But because of the pandemic the tournament was cancelled in each of the past two years.

“It’s good to get it going again,” said Harley Desjarlais, the chair of this year’s host organizing committee. “And it’s a relief to host after a couple of years of cancellations.”

Peguis First Nation in Manitoba had hosted the last national tournament in 2019.

For the River Kings, this will mark the fourth time they have hosted the event. The last time the tourney was in Prince George, in 2016, a record 77 clubs participated.

As for this year, there are 54 teams entered in five divisions.

“Our numbers are down,” Desjarlais said. “The pandemic has had a big effect on everybody. A lot of our people aren’t as financially set as they were before. And the cost of travel has gone up exponentially across Canada.”

The senior men’s category will feature 22 entrants. And there will be 14 clubs participating in the senior women’s division.

There are also a pair of masters categories (women’s and men’s) for those players ages 40 and over. Four women’s teams will take part in their grouping and the men’s division will have a half dozen entrants.

And there will also be eight squads competing in the men’s under-23 division.

Even though there are less teams taking part compared to some previous years, Desjarlais anticipates the level of play will be perhaps the best it has ever been.

“The quality will be even better with people on less teams now,” he said.

Unlike some other national Indigenous tournaments, participants do not necessarily have to represent their own community or even province for that matter.

Squads can sign up players from anywhere in Canada.

The only two exceptions that do not have to pay an entry fee are the Alexis Nakota Sioux  Nation women’s squad from Alberta and the Peguis First Nation men’s club.

That’s because they won their respective categories at the last nationals, and organizers must cover their entry fees and accommodation expenses this year.

The draws for all of the divisions are expected to be held on Tuesday, July 26.

A total of seven fields at a pair of different facilities will be utilized for matches throughout this week’s event.

Desjarlais is also expecting some large crowds to take in some of the action.

“We’re anticipating to be operating at full capacity,” he said, adding he believes between 2,000 and 3,000 spectators will attend action each day at Spruce City Stadium, which will have five of its fields in use.

“And it’s not just going to be people from Prince George watching. They’re going to be coming from across Canada.”

Traditionally the majority of tournament entrants are from the country’s four western provinces.