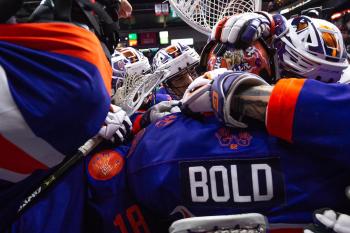 Photo is from the Facebook fan page of the Halifax Thunderbirds, who will be playing exhibition games in Akwesasne in November.
By Sam Laskaris
Local Journalism Initiative Reporter
Windspeaker.com

The Mohawk community of Akwesasne in eastern Ontario is making plans to welcome some of the top lacrosse players around.

Three clubs that participate in the National Lacrosse League (NLL), the world’s top professional box lacrosse circuit, will head to Akwesasne to play some exhibition games next month from Nov. 11 to Nov. 13.

Taking part will be the Halifax Thunderbirds, San Diego Seals and the Las Vegas Desert Dogs, an expansion franchise preparing for its inaugural campaign which begins in December.

The squads will play two games each in Akwesasne. All matches will be staged at the A’nowara’ko:wa Arena.

The 1,500-seat facility is located on the Ontario side of Akwesasne. The Mohawk community extends into the province of Quebec and also the state of New York.

Officials from the Strong Roots Charitable Foundation are hosting the exhibition tournament.

Foundation administrator Chessie White said a donation was made to each of the three participating pro clubs for going to Akwesasne to play games.

“They will use that money to grow the game of lacrosse in their own areas,” White said, adding the pro clubs will be specifically utilizing funds to further the careers of Indigenous players in their cities and surrounding areas.

White is anticipating sellouts for all three matches that will be held in Akwesasne.

Action kicks off on Nov. 11 when the Desert Dogs will battle the Seals in a 6 p.m. contest. The Seals will then play the Thunderbirds on Nov. 12, also in a match that begins at 6 p.m.

And the tourney will conclude on Nov. 13, with Halifax facing off against Las Vegas in a 6 p.m. tilt.

“Everyone is so excited,” White said of community members who will be able to see pro players live and in person up close. “Akwesasne has a long history with the Creator’s game.”

The Strong Roots Charitable Foundation was launched in 2015. The not-for-profit corporation aims to provide support and enrich the lives of Akwesasne youth and Elders.

Members of the general public are not able to purchase tickets for the NLL exhibition contests.

For now, tickets can only be bought via sponsorship packages. A bronze sponsorship costs $5,000 while gold sponsorships are available for $10,000 each.

Sponsorship packages include tickets – 100 for bronze and 200 for gold – which are then distributed to community members.

White anticipates large numbers of Akwesasne members from both Canada and the United States to attend the games.

“We expect them to come from both,” she said. “Our residents can travel freely back and forth (across the border),” she said.

White said community members will in all likelihood know quite a bit about some of the participating players. She said that in the past both the Halifax and San Diego teams have had various players not only from Akwesasne but also who grew up playing for different eastern Ontario teams, including Ottawa, Cornwall and Nepean.

The Thunderbirds also have a strong Indigenous connection. The franchise is owned by Six Nations businessman Curt Styres, who is also the president and general manager of the Halifax club.

The Thunderbirds’ organization also includes plenty of players, including captain Cody Jamieson, and members of the team’s lacrosse operations and front office, who are from Six Nations.

All three clubs that are playing exhibition matches in Akwesasne will be using the games to help finalize their rosters for the coming year.

The 2022-23 NLL regular season will commence on Dec. 2 with the Thunderbirds playing the Philadelphia Wings.