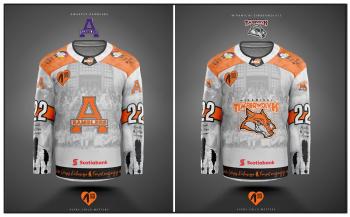 Jerseys that will be worn by the Amherst Ramblers and Miramichi Timberwolves during their Every Child Matters games.

“The MHL Week of Reconciliation is about healing, hearing and recognizing,” Morrell said. “As we play the great game of hockey 12 times in the coming weeks, we use this time to help heal in our own small way.” — Maritime Hockey League Ever Child Matters video
By Sam Laskaris
Local Journalism Initiative Reporter
Windspeaker.com

All 12 entrants in the Maritime Hockey League (MHL) will be hosting their own Every Child Matters game this season.

The matches are focused on Indigenous recognition and reconciliation. Home teams will wear specially-designed jerseys for each contest.

Those jerseys will then be auctioned off and proceeds will be turned over to area First Nation communities.

The plan is to then have those funds utilized to purchase tickets for First Nations youth so they can attend a future MHL game in their nearby community.

“It’s a chance to get them introduced to the game,” MHL commissioner Steve Dykeman said of the young spectators who will hopefully become fans of the league. “And it gets teams more folks (into the stands) and involved more with the team.”

The MHL is one of nine leagues that comprise the Canadian Junior Hockey League (CJHL). Earlier this year CJHL officials had talked about having squads from all of their participating leagues host Truth and Reconciliation games, if possible this season.

The hope was to stage those matches as close to Sept. 30 as possible. It’s the date of the new federal statutory holiday National Day for Truth and Reconciliation.

CJHL officials, however, realized squads did not have much time to prepare for special event nights during the 2021-22 campaign and that most franchises were more focused on their preparation efforts to safely return to hosting games during the ongoing pandemic.

While cognizant of CJHL hopes to have clubs hosting nights to honour Indigenous people,

Dykeman said talks of hosting Every Child Matters contests in his league resurfaced at the MHL’s annual general meeting in the summer.

“I think somebody just put up their hand and said we should do it and it just kind of grew from there,” Dykeman said.

The MHL features six squads in Nova Scotia, five in New Brunswick and the Summerside Capitals in Prince Edward Island. All league entrants have at least one First Nation nearby.

Though he never played in the MHL, league officials were able to bring former NHL player Everett Sanipass, a member of Elsipogtog First Nation in New Brunswick, on board its committee to help organize the Every Child Matters games.

Sanipass, who appeared in 169 NHL matches with the Chicago Blackhawks and Quebec Nordiques, was on hand for the MHL’s first Every Child Matters contest, hosted Wednesday by the New Brunswick-based Grand Falls Rapids.

Tobique First Nation Chief Ross Perley also attended the game and was part of the on-ice, pre-game ceremony. He was joined by some school-aged children from his First Nation who assisted with the ceremonial official puck drop.

Both Dykeman and Sanipass are both expected to attend several upcoming matches as well.

“It’s been an enlightening and educational experience,” Dykeman said of the league’s involvement in assisting with the games.

The league has also put out a video to go along with the themed games.

That video can be viewed here: https://www.youtube.com/watch?v=ar1FXr42b7U

Dykeman said the video will be shown prior to the majority of league games in each city. But a couple of MHL squads do not have a giant screen or the capacity to show the video in their facility.

MHL broadcaster Dave Morrell is the narrator for the video.
“Our country has stained itself forever by all that has been uncovered this past year,” Morrell said in the video, referring to unmarked graves of children found at former residential school sites. “No one word, one promise or single hockey game can undo what our Indigenous families have endured over this past 100 years of residential schools.”

But the Maritime circuit is doing what it can.

“The MHL Week of Reconciliation is about healing, hearing and recognizing,” Morrell said. “As we play the great game of hockey 12 times in the coming weeks, we use this time to help heal in our own small way.”

Dykeman said league officials will be having a board meeting this weekend. He anticipates the agenda to include whether the MHL will continue Every Child Matters contests in future years.

“It certainly has the ability and makings of something we can do in other years,” Dykeman said.

The league-produced video concludes with the following statement.

“We promise to never forget and to always remember to mark this time as Every Child Matters,” Morrell said.