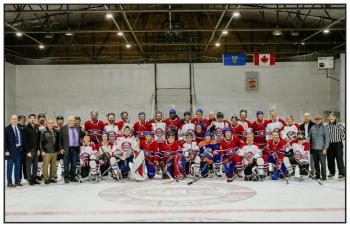 Officials with a Junior B hockey club in St. Paul, Alta. are still basking in the success of a recent exhibition game involving members of the Montreal Canadiens’ alumni squad.

And now reps with the St. Paul Canadiens are busily preparing for an NHL Indigenous Alumni Game, which is scheduled for Jan. 14, 2023.

The St. Paul Canadiens, who compete in the North Eastern Alberta Junior B Hockey League, had a squad comprised of some of their alumni players face off against the ex-NHLers from their namesake Montreal franchise in an exhibition game in late October.

The two organizations have a long-standing history dating back to the early 1950s when the St. Paul juvenile team, which went on to become the Jr. B Canadiens, had an affiliation with the NHL Canadiens.

The St. Paul side also had a sponsorship package with the Western Hockey League’s Regina Pats, which was essentially a recruitment tool to move deserving players up to higher levels.

The St. Paul Canadiens are now in their 68th season of operations.

“We’re one of the oldest junior franchises in Canada,” said Patrick Lamoureux, the president of the St. Paul Canadiens alumni foundation, which was launched two years ago.

The St. Paul Canadiens alumni squad will square off against the NHL Indigenous Alumni in January’s contest.

“This is huge for us,” Lamoureux said. “It falls into the line of truth and reconciliation, and we’ve added a bit of our own twist to it.”

Lamoureux said hockey will be the main theme of the event.

“We are not politicizing this day whatsoever,” he said. “We’re just here to celebrate the game of hockey and the history of hockey in our community.”

St. Paul has a population of about 6,000. The St. Paul Canadiens have their share of Indigenous fans, with several First Nations and Métis settlements nearby.

Lamoureux estimates about 200 Indigenous players have toiled for the Canadiens since their inception.

“There have been several guys that have played semi-pro or have gone through post-secondary levels,” he said.

Lamoureux said the Canadiens’ alumni foundation was started to assist with a number of initiatives, including giving back to the community by assisting various grassroots programs and also starting scholarship programs.

Foundation officials have partnered with the Métis Nation of Alberta, which plans to present a $2,500 scholarship to a current St. Paul player who is Métis to pursue a post-secondary education.

Of the four Indigenous players on this year’s St. Paul roster, three are Métis.

St. Paul officials were told to check out the details of the First Assist program, which is led by former NHLer John Chabot, a member of Kitigan Zibi Anishinabeg Nation in Quebec.

Through his First Assist program, Chabot visits numerous Indigenous communities and leads hockey skills camps. While in the various communities he also talks about sports and educational programs that can help youth become better student athletes.

Chabot also frequently suits up for the NHL Indigenous alumni squad, which participates in exhibition contests throughout the country.

Chabot will operate his First Assist program while in St. Paul for the exhibition game in the new year.

Lamoureux said officials are still trying to determine which former St. Paul and ex-NHLers will be participating in the local January game.

“In the next couple of weeks we’ll have a final roster,” he said.

The game will be staged at the Clancy Richard Arena, the 1,500- seat rink the St. Paul squad utilizes for its home contests.

“We’re hoping to sell it out,” Lamoureux said of the match.

The game between the two alumni squads is scheduled to begin at 4 p.m. MT. That will be followed by a St. Paul Canadiens’ regular season contest against the Onion Lake Border Chiefs, which has a 7 p.m. faceoff.