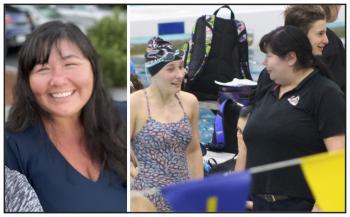 Leanne Sirup has been chosen as the 2021 female recipient for the National Indigenous Coaching Awards.

“As an athlete, I was controlling me and my performances. Now, as a coach, I get to guide them on how to control their performances.” — Leanne Sirup
By Sam Laskaris
Local Journalism Initiative Reporter
Windspeaker.com

Leanne Sirup has coached her share of swimmers to medal-winning performances the past couple of decades.

She was shocked, however, to receive news that she had been recognized with a prestigious honour.

Sirup has been selected as the 2021 female recipient for the National Indigenous Coaching Awards.

“It’s not something I expected in my inbox,” Sirup said.

This actually marks the second time she has received the national coaching award. She first won it in 2007.

The national accolades are presented annually by the Aboriginal Sport Circle, the national governing body for Indigenous sports in Canada.

Patrick Leask, a member of Sapotaweyak Cree Nation in Manitoba, was chosen as the male recipient.

Sirup, a 46-year-old Inuk, has spent the past 16 years serving as the head coach of the Duncan Swim Club in her hometown of Duncan, B.C.

Sirup has been the head coach of the Duncan Stingrays and currently oversees the programming for more than 100 athletes that are members of the club.

This includes a dozen swimmers from Pacheedaht First Nation from Port Renfrew. These 12 athletes frequently make the 90-minute drive (each way) from Port Renfrew to Duncan to participate in the club’s training sessions.

Sirup was no stranger to the Stingrays’ program before taking over the head coaching duties.

She swam for the club for 13 years.

Sirup also represented another club, Victoria-based Island Swimming during her own competitive days. And she competed for national youth squads, setting various provincial and national records in the pool.

Before joining the Duncan Swim Club, Sirup had some other coaching gigs.

For starters, she was the head coach of the Cowichan Stseelhtun Swim Club, starting in September 2002 until July 2006.

She also spent eight years, from 2001 through 2009, as the head coach of Cowichan Aquannis Masters Swimming.

Sirup has been heavily involved with the North American Indigenous Games (NAIG). She has served as the head coach of the B.C. swim squad at the last four Games.

She guided the B.C. entry to a silver-medal team finish in her NAIG in Denver in 2006.

Sirup also led the club to second-place team finishes at both the 2008 Games in Cowichan, B.C. and the 2014 NAIG in Regina.

Then, at the last NAIG that were staged in 2017 in Toronto, Sirup coached Team B.C. to a gold-medal finish.

The squad consisted of 24 swimmers. They collectively captured 24 gold medals and more than 70 medals in total.

“Our swimmers are insane,” Sirup said. “They do a tremendous amount of winning.”

Sirup also enjoyed her own share of success at NAIG. As an athlete, she returned home with eight medals from the 1997 Games, which were held in Victoria, B.C.

For starters, she captured five gold medals in individual races. And she was also on three silver-medal winning relay squads.

Sirup had been selected to serve as the B.C. swim coach for the 2020 NAIG. But those Games, which were to be held in Halifax, have been postponed a couple of times because of the ongoing pandemic and are now scheduled to take place in 2023.

Though she has yet to receive official word, Sirup is hoping she can remain as the B.C. coach who will take part at the Halifax NAIG.

Sirup said there is a significant difference between coaching and competing.

Sirup also credits three organizations that she believes have led to her coaching successes.

They are Swim BC, the Indigenous Sport, Physical Activity and Recreation Council (I-SPARC) and the Canadian Sport Institute.

Sirup works for Swim BC, the governing body of swimming in the province, on a contract basis as a learning facilitator for its National Coaching Certification Program (NCCP).

She also is the volunteer head swim coach for I-SPARC. Her duties include identifying and fostering athlete development for the province’s NAIG-bound swim competitors.

Sirup continues to upgrade her own coaching credentials. She’s currently in the NCCP’s Advanced Coaching Diploma program, operating through the Canadian Sport Institute.