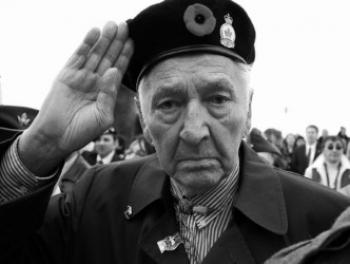 “We were at this place in Holland. We had our breakfast every morning at 5 a.m. The little kids knew there was food and they’d come around. This little Dutch girl had her hands out. I saw her every day and it was heartbreaking. Those poor little buggers were starving.”
By Dianne Meilli

Even though he returned to Juno Beach with mixed feelings, Private Robert Bruce made the trip in 2009 to be honoured as a Métis soldier.

The Elder made the trip with 50 Canadian delegates as one of only a handful of D-Day soldiers who attended the unveiling of a memorial dedicated to Metis veterans at the Juno Beach Centre in Courseulles-sur-Mer. The centre is immediately behind the beach in Normandy where 14,000 Canadian troops landed on June 6, 1944.

Bruce, who was in the second wave of soldiers to get off the boats, described the day in detail during a radio interview.

“I landed with the troops and – I’m guessing now – but I’d say there were 5,000 ships in that harbour. They were just packed together. There was a British battleship with 16-inch guns. It would thunder, ka-boom, when it went off and the ship would lurch in the water.

“I’d never seen anything like it in my life. I’m from Saskatchewan and I was only 22. Until then, the biggest city I’d been in was Prince Albert. But to see all of this … I had no words for it. It was just amazing.”

Bruce made it safely through the landing but lost his brother-in-law on D-Day.

“He was in the paratroopers. He wanted me to go in his outfit and I was going to go but the officer wouldn’t let me. That bugged me for a long time.”

But Bruce was most affected by the sight of the children of war he encountered.

“We were at this place in Holland. We had our breakfast every morning at 5 a.m. The little kids knew there was food and they’d come around. This little Dutch girl had her hands out.”

Voice faltering, Bruce wondered aloud why he didn’t keep contact with her. “I saw her every day and it was heartbreaking. Those poor little buggers were starving.”

Son Don Bruce had never heard his father say a word about the war he fought in until the interview.

“When he was being recorded, it was a different man. I never really knew him until then and I tried to feel what it must have felt like as a young man. What he did was necessary. There’s no two ways about it.”

Robert kept silent regarding his years in the war because of his contempt for it.

“They talk about ‘the Great War’ but I say ‘what’s great about war?’ What’s great about fighting and killing? Other people … they wanted to live too. In fact, I’m walking down this ditch this one time and I see this body. This man was lying like he was sleeping. He didn’t seem to be wounded and I thought he was just playing possum so I poked him with my rifle and I said ‘come on, wake up you S.O.B.’ He was dead all right and I saw he had a picture in his tunic pocket. It showed his daughter and his wife. This man’s family is dead and now he’s dead. What for? He must have wanted to live, too, eh?”

Born in Sturgeon Valley, Sask. on Feb. 11, 1922, Robert Bruce joined the Royal Canadian Army Service Corps in 1941 at the age of 19 and fought in continental Europe. While stationed in the United Kingdom he met and married his war bride Lorna. The two were married for 70 years.

For his dedicated service, Private Bruce received the Canadian Voluntary Service Medal, the 1939-1945 Star, the France and Germany Star and the Defence Medal. He was honourably discharged in December 1945.

At the Juno Beach unveiling of the Metis memorial, Chuck Strahl, then Minister of Indian Affairs and Northern Development and Federal Interlocutor for Metis and Non-Status Indians, said that when the call went out during the Second World War for people to join up, entire Métis communities volunteered.

“Some of them walked for hours and days, they say, in order to join up in the Second World War. So they’re real fighters for freedom and it’s a real tribute and honour for me, of course, to be here to pay tribute to them.”

For Métis veterans, this was the first official recognition they’d ever received for their service. Soldiers like Robert Bruce said they were denied postwar benefits such as financial help for housing, land and education.

They said they were left out again in 2002 when status-Indian veterans were offered $20,000 each for benefits they had previously been denied.

According to a report prepared for a Métis veterans association, only eight per cent of Métis veterans reported receiving any benefits and fewer than one per cent received land under the Veterans Land Act.