Elder thanks wolf for his gift 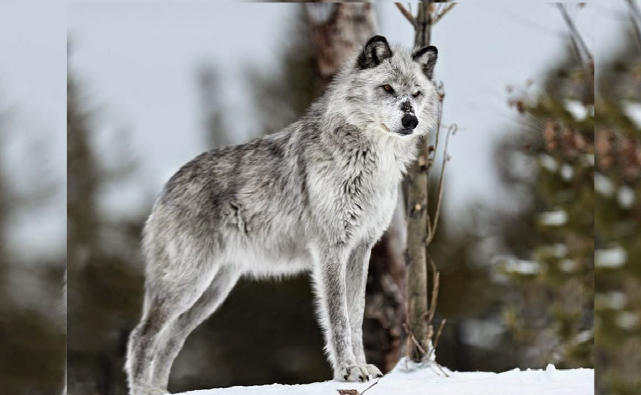 Editor’s Note: Alfred Lennie passed away in February 2006. We printed this story with the permission of his wife, Julie.

I was a trapper and guide in the Northwest Territories, 200 miles north of Tulita, at a place called Lennie Lake. I lived with my wife and daughter in a little log cabin, nestled in the bushes along the lake. Many times we would see wolf packs hunting and travelling from out our window. I would take my rifle, load it with a few shells and shoot a few of them… until one day, when a lone wolf changed my life.

Early one morning, I looked through my frost-covered window and there he was—a lone, big silver wolf. Quickly, I dressed in my parka, grabbed my rifle and shells, jumped on my snowmobile and raced after him.

The wolf saw me and he headed out across the lake. He was almost to the bushes when I raised my rifle and shot. I could not miss. I got him right in the stomach, but he disappeared into the bushes. I could not pursue him because the snow was too deep. This meant I must return to my cabin for my snowshoes.

Upon my return to the spot where I had shot the wolf, I put on my snowshoes and began to follow the bloody footprints into the bushes. Just as I entered, I could see him lying under some low branches. He also saw me.

He was so weak, having lost a lot of blood. He watched both sides of the lake and I guess he must have realized there was no way to escape.

I stopped my ski-doo and watched him. That's when he looked straight at me, looking directly into my eyes. I could feel him questioning my actions. He seemed to be asking, "Why are you doing this to me?"

My heart felt heavy and sad, but I had no choice but to kill him. He was wounded and he was suffering. It would not have been fair to leave him in pain any longer. I had to end his life.

With a sad heart, I knelt down beside this beautiful, mysterious animal. There, in the snow, my thoughts wandered back to the time when I had a very powerful dream. I was only a young boy.

In this dream I was playing along Deh Cho (Mackenzie River) when I spotted a pack of wolves travelling together. Suddenly, one of the wolves left the pack and approached me. I was really scared, until he began to speak to me.

He said, "Do not be afraid. I only want to share something with you." He showed me a pair of snowshoes. When I looked closely at them, I saw they were laced differently than how my people laced their snowshoes. I realized the wolf was showing me how to lace the snowshoes in a new way.

When I awoke from my dream, I knew full well the wolf had shown me how to be a better hunter in my youth, with this improved way of making snowshoes. Now I could move better in the snow and get closer to animals for food. The wolf had given me a gift to use and share with my people.

Now my thoughts returned to the moment at hand. Here I was kneeling over this silver-haired animal and I felt so ashamed for taking this wolf's life. One of his relatives, or maybe even he, himself, had been the one that showed me the way to be a better hunter. And I had killed him.

With the clarity of the clear morning sky, I knew it was time to repay the wolf that helped me provide food and clothing for my family. It was time to thank the wolf for sharing his knowledge with me so long ago. I knew then that I would never hunt another wolf.

I spent a few more years in the bush and I never again brought down a wolf. I learned to respect the wolf. In return, they respected me and never bothered my traps after that. There is so much man can learn from the wolf. They are an animal of which we can never know the depths.

An old man once told me, "You must treat the animals with respect and never infringe upon their ways. Animals can teach us many valuable lessons if we will only let them."

The wolf taught me a very important lesson. I now appreciate the thoughts and feelings of wild animals. They are so much like us. They are wise beyond our human knowledge. We must listen to them.